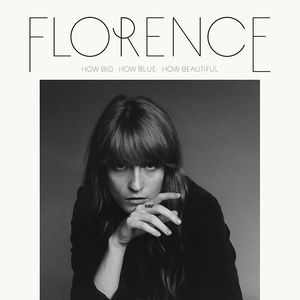 FLORENCE & THE MACHINE - HOW BIG, HOW BLUE, HOW BEAUTIFUL

The much-anticipated third studio long-player from Florence Welch and her mechanically inclined companions, How Big, How Blue, How Beautiful arrives after a period of recalibration for the spirited English songtress. Arriving three-and-a-half years after 2011's well-received Ceremonials, the 11-track set, the first Florence + the Machine album to be produced by Markus Dravs (Arcade Fire, Coldplay), eschews some of the bombast and water- and death-fixated metaphors of Lungs and Ceremonials in favor of a more restrained sonic scope and an honest reckoning with the dark follies of your late twenties. This change is most notable on the workmanlike opener "Ship to Wreck," a shimmering, open road-ready folk-rock rumination on the ambiguity/inevitability of post-fame self-destruction that, unlike prior first cuts like "Dog Days Are Over" and "Only If for a Night," feels firmly rooted in the now. Whether it be simple maturity or Dravs' calculated production style, there's no denying that an effort has been made to dial back a bit on some of the pageantry of Welch's earlier works, and for the most part, her penchant for pairing mystic Bronte-esque pondering with similarly windswept pagan/gothic gospel rock is left bubbling beneath the surface. This attempt to reign in Welch's more histrionic tendencies yields mixed results, with some songs finding the sweet spot between bluster and nuance and others (most of them in the album's sleepy latter half) disappearing altogether. Of the former, the bluesy (and ballsy) "What a Man," the propulsive and purposeful "Delilah," and the gorgeous title track impress the most. Instead of building to a fevered crescendo, as is the Flo-Machine way, the latter cut, a transcendent, slow-burning, chamber pop gem, dissolves into a simple and elegant, yet still goose-bump-inducing round of horns, and is breathtaking without knocking the wind out of you. Whether How Big, How Blue, How Beautiful ends up being a transitional album remains to be seen, as there is enough of each side of Welch (the pastoral and the feral) represented to tip the scale either way. That said, her Brit-pop soul treacle is still miles better than some of her contemporaries' top-tier offerings, and when the album connects it moves right in and starts to redecorate, but when it falters, it's akin to a chatty party guest failing to realize that everyone else has gone home.

There are 3 bands using the name Florence: 1) Alias of Dutch techno artist Stefan Robbers 2) A Japanese trance band that does anime soundtracks, such as Genesis of Aquarion 3) Canadian post-hardcore band additionally, this may be an incorrect tag for Florence + The Machine 1) Dutch techno artist Stefan Robbers who also records using the name Florence. Stefan Robbers has earned considerable respect, both in the Netherlands and abroad, as one of the most versatile and productive musicians in the field of electronic dance music. His more melodic techno music was released under the aliases Terrace (Djax, Eevo Lute) and Florence. Since 1992 he has operated Eevo Lute Muzique, a record company specializing in abstract and modern electronic music in its broadest form. The label has brought forth over 40 releases during recent years. After a refreshing pause in the period 1998 to 2001 the label resumed its activities last year, with renewed energy and lots of good music on the way! EevoNext is a fully digital web label emerging from the fundaments of Eevo Lute Muzique, one of the most influential techno labels from the Netherlands. Started in November 2006, it brings a bi-monthly release of a featured artist as a high quality download with emphasis on quality and playability. Available from the EEVONEXT.COM web store and established online stores like iTunes, Beatport and others. Stefan’s integrity and artistic qualities earned him a solid reputation in the techno community. Names like Armando (Chicago), Ron Trent (Chicago) Sven Vath (Frankfurt) and Speedy J (Rotterdam) asked him for remixes of their songs. Detroit’s own boy wonder Carl Craig entrusted Eevo Lute with his most delicate techno tracks. 3) Florence is a Canadian post-hardcore band. Ever since they were friends, Mike (Guitar 1) and Guil (Guitar 2) always wanted to form a band together. With the same influences and a long history of guitar duet, they had already a strong musicianship. Together, they give Florence ‘s brutal yet catchy melodies. Phil was chosen for his skills and creativity on drums in October 2003. For needs of a bassist, Phil suggested Hermann & his solid and original rhythmic, who happened to be his long time best friend and band mate for five years in a few other projects. By the end of November, Mike introduced his new friend Jay, the first singer. In April 2004, after several shows, they began recording 2 songs, “Wings of Tragedy” & Troubled Skies, to put on the internet and get more gigs. After more then 100 shows in a year all around the province of Quebec, Florence were ready to step into the studio to record their EP but some changes needed to be made in the line-up. In February 2005, Florence decided to move foward by changing their singer for Pat, a good friend of the band. After an appearance on the first Taste of Chaos & after opening for bands such as Underoath, He Is Legend, 18 Visions, Senses Fail & more, Florence got to record their first EP: “Great Life Matters”. It was released in July 2005 and got amazing critics so far. The band had their first video, “She’s On A Roll”, on air on Musique Plus (Quebec’s MuchMusic) in winter of 2006. In June 2006, the band had just finished recording a 3 song demo with their self-titled song “FLORENCE”, when Gill Boldcock announced that he was in the obligation to leave the band to pursue another career. That’s when florence needed to find a new guitarist that would do the job,that’s when Johnny (ex-adore stella) came across their way www.myspace.com/florence 4) Florence - 80S Italo Disco group. Marco Faragli - Vocal & Keyboards Marino Spagna - Drums & Percussions Umberto Urzi - Guitar & Bass Members: Marco Faragli, Marino Spagna, Umberto Urzi (left) Variations: Florence Magic Group, Ricky Maltese Read more on Last.fm. User-contributed text is available under the Creative Commons By-SA License; additional terms may apply.

Last FM Information on The Machine

There is more than one artist named The Machine. 1. A Dutch psychedelic rock band 2. An American Pink Floyd tribute band 3. A Lithuanian Hardstyle producer 1.The Machine is a power trio from the Rotterdam area, The Netherlands. Their music characterizes itself as powerful with a lot of dynamics: ranging from hard-hitting rock to spaced out jams with a more experimental approach. The band’s very own sound is a compromise between organic and groovy drumming, inventive low end pounding and a punishing wall of guitar with some old school lead work. Since forming in 2007, The Machine released several albums and played at some amazing occasions – among them are the fantastic Roadburn Festival (2010 & 2011), Burg Herzberg Festival (2011), DunaJam Festival (2012) and numerous club shows throughout Europe. They’re currently signed to Elektrohasch Records. www.themachineweb.com 2. Pink Floyd tribute from New York, USA THE MACHINE, America’s top Pink Floyd show, has forged a 20 year reputation of excellence, extending the legacy of Pink Floyd, while creating another legacy all their own. Over the years, The Machine has touched the hearts and souls of many, selling out large clubs and theatres across North and Central America, Europe and Asia. They have also appeared at renowned music festivals such as Bonnaroo, Riverbend, and Germany’s Rock of Ages. The New York based band focuses on making every show an authentic Floydian experience for their fans. Known for performing a diverse mix of The Floyd’s extensive 16-album repertoire (complete with faithful renditions of well known hits as well as obscure gems), The Machine’s stellar musicianship, dramatic lighting and video, and their passionate delivery sets them above and beyond the rest. In the classic tradition, The Machine explores collective improvisation paralleling and even rivaling that of an early 1970’s Pink Floyd mentality. Their use of expanded theatrical elements and elaborate stage displays continues in the spirit of the later Floyd lineups of the1980’s. The band is also known for recreating entire albums as a part of their show, accepting requests from fans, and for taking an A to Z approach in which one song is played for every letter of the alphabet. Additionally, the quartet has been sharing the stage with full symphony orchestras, enhancing and expanding the sonic depth of Pink Floyd. 3. Original name of The Machine is Ramunas Vabolis, born in 1988 october 24th in Lithuania, Kaunas city. As being a child he was very interested in electronic dance music, especially trance. He was liking it from the childhood, and at the age of fifteen he discovered hardstyle. Inspired by hard beats after the year he started to leard DJ-ing and also started to learn to use music software on a simple PC. fter half of the year of producing at the age of seventeen he made track called name RAW and with it got his first contact with the label. Track was realesed and got good success. More realeses fallowed like Immortality and especially Butterfly, which became a hit in dutch scene and was played at various big events. He joined to a succesfull dj/producer group Hard'Onez (main head DJ N3ck) which name gave more popularity to a growing dj/producer. Be ready for Hard'Onez world domination! http://www.myspace.com/themachinelt Read more on Last.fm. User-contributed text is available under the Creative Commons By-SA License; additional terms may apply.
FREE SHIPPING ON ORDERS OVER £100 TO UK MAINLAND ONLY
See exclusions
View Cart