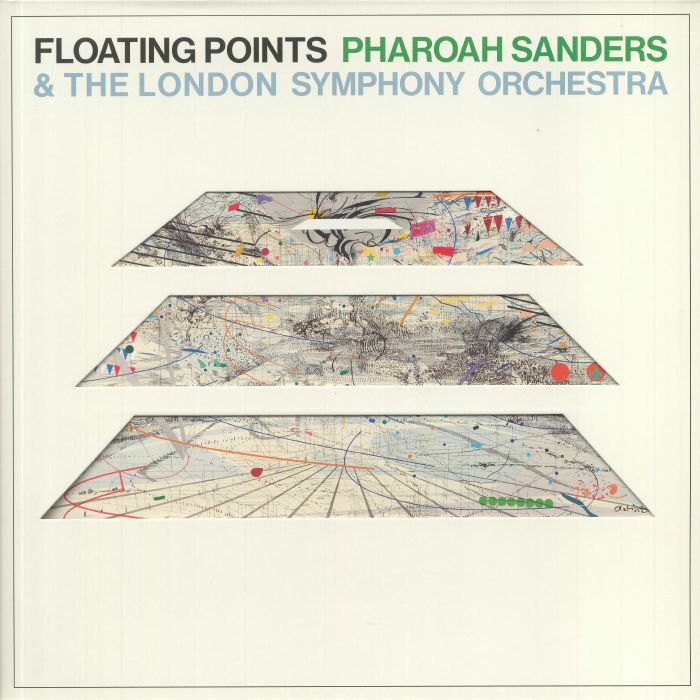 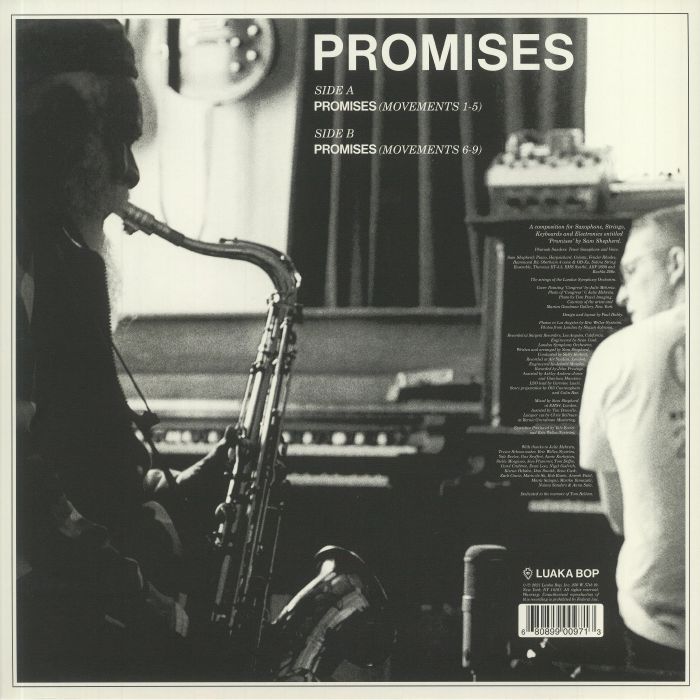 Pharoah: Many times, people think I might be asleep... but in fact, I am just listening to music in my head. I'm always listening... to the sounds around me... and playing, in my mind... and sometimes I dream.

Sam: What were you dreaming about?

Pharoah: I'm on a ship. In the ocean. Bears coming around smoking cigars. The bears are singing, ‘We have the music. We have what you're looking for.’ I say, ‘Really?’ And I was making fish dinners. Shark..Lobster. Got all kinds of fish. And you know, a good pie. Pumpkin pie. You like pumpkin pie?

Sam: It's cool. I think the bit in the middle, where it stops again...I think you can hear...We were both kind of confused. I like it as well because it sounds like two musicians that are trying to guide each other.

Pharoah: Yeah, I'm cool with it.

Sam: Okay. Yeah, I think you're playing is beautiful.

Floating Points is British electronic musician and neuroscientist Sam Shepherd from Manchester. Citing influences as varied as Theo Parrish, Dorothy Ashby and Stravinsky, Shepherd has been an accomplished pianist since the age of 16. The variety in influences is mirrored in the diversity of his productions that range from string quartet to gritty beats. As a DJ, mostly his sets sit between boogie & house. Read more on Last.fm. User-contributed text is available under the Creative Commons By-SA License; additional terms may apply.

The LSO was founded in 1904 as an independent, self governing organization, the first such orchestra in the UK. It played its first concert on 9 June of that year, with Hans Richter conducting. He remained principal conductor until 1911, when Edward Elgar took over for a year, leading six concerts as principal conductor. More recently, its principal conductors have included Pierre Monteux (1961–64), Istvan Kertesz (1965–68), André Previn (1968–79) and Claudio Abbado (1979–88). From 1988-1995, the American Michael Tilson-Thomas took over, and in 1995, became principal guest conductor. Sir Colin Davis served as the LSO's Principal Conductor from 1995-2006, and in 2007 took the post of President of the orchestra. On 1 January 2007, Valery Gergiev became the LSO's Principal Conductor. Previn holds the title of Conductor Laureate. In 2006, Daniel Harding became the co-principal guest conductor alongside Tilson Thomas. Richard Hickox is the Associate Guest Conductor of the LSO. The LSO became the first British orchestra to play overseas when it went to Paris in 1906. The LSO was due to sail on the RMS Titanic for a concert in New York in April 1912 but fortunately had to change the booking at the last minute. It was also the first to play in the United States, in 1912, and in 1973 it was the first to be invited to take part in the Salzburg Festival. It continues to make tours around the world. In 1966 the London Symphony Chorus (LSC) was formed to complement the work of the LSO. with more that two hundred amateur singers, the LSC maintains a close association with the LSO; however it has developed an independent life, which allows it to partner other leading orchestras. The LSO has long been considered the most extraverted of the London orchestras. For most of its life it refused to allow women to become members, ostensibly on the grounds that women would affect the sound of the orchestra (there has been a similar controversy at the Vienna Philharmonic Orchestra). There is an air of youthful high spirits to much of its music-making that is shown off in performances of such composers as Berlioz and Prokofiev. The LSO has often had internationally-known players as wind soloists, including such artists as James Galway (flute), Gervase de Peyer (clarinet), Roger Lord (oboe), Osian Ellis (harp), John Georgiadis (violin) and Barry Tuckwell (horn). Like most ensembles, the orchestra has a great ability to vary its sound, producing very different tone colours under such diverse conductors as Stokowski (with whom it made a series of memorable recordings), Adrian Boult, Jascha Horenstein, Georg Solti, André Previn, George Szell, Claudio Abbado, Leonard Bernstein, John Barbirolli, and Karl Böhm, who developed a close relationship with the orchestra late in his life. Böhm and Bernstein each held the title of LSO President in their later years. Clive Gillinson, a former cellist with the orchestra, served as the LSO's Managing Director from 1984 to 2005, and is widely credited with bringing great stability to the LSO's organization after severe fiscal troubles.[1] Since 2005, Kathryn McDowell is the Managing Director of the LSO.[2] Read more on Last.fm. User-contributed text is available under the Creative Commons By-SA License; additional terms may apply.

Pharoah Sanders (b. 1940) is a U.S. jazz saxophonist. Sanders was born on 13th October 1940 in Little Rock, Arkansas, under the name Farrell Sanders. He began his professional career playing tenor saxophone in Oakland, California. Sanders moved to New York City in 1962. He received his nickname "Pharoah" from Sun Ra, with whom Sanders performed. He came to prominence playing with John Coltrane's band starting in 1965, as Coltrane began experimenting with the music which would soon become known as avant-garde jazz. Although he developed a slightly different style from Coltrane, Sanders was strongly influenced by their collaboration together. Sanders was also greatly influenced by Coltrane's earlier works (in which Sanders did not collaborate), particularly A Love Supreme. Spiritual elements such as the chanting in A Love Supreme would later show up in many of Sanders' own works. Sanders would also go on to produce much free jazz, being influenced by his free jazz collaborations with Coltrane, particularly Coltrane's most notable free-jazz work, Ascension (1965), as well as their dual-tenor recording Meditations (1965). In 1968 he participated in Mike Mantler & Carla Bley's JCOA: Jazz Composer's Orchestra Association album Communications featuring Cecil Taylor, Don Cherry, Larry Coryell and Gato Barbieri. This solo has been referred to by John Zorn and others as the most intense and inspiring free tenor solo ever put to tape. In the 1970s, Sanders pursued his own recordings and continued to work with the likes of Alice Coltrane on her Journey in Satchidananda album. In 1994 he travelled to Morocco to record with master Gnawa musician Maleem Mahmoud Ghania, resulting in the Bill Laswell-produced The Trance of Seven Colours. Sanders continued to work with Laswell, Jah Wobble, and others on the albums Message from Home (1996) and Save Our Children (1998). Sanders is known for his overblowing, harmonic, and multiphonic techniques on the saxophone, as well as his use of "sheets of sound". Read more on Last.fm. User-contributed text is available under the Creative Commons By-SA License; additional terms may apply.
FREE SHIPPING ON ORDERS OVER £100 TO UK MAINLAND ONLY
See exclusions
View Cart