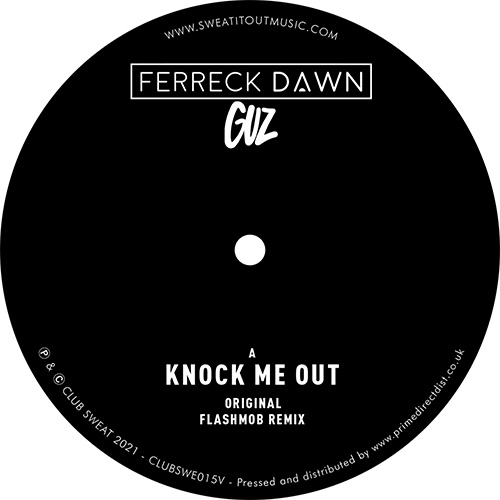 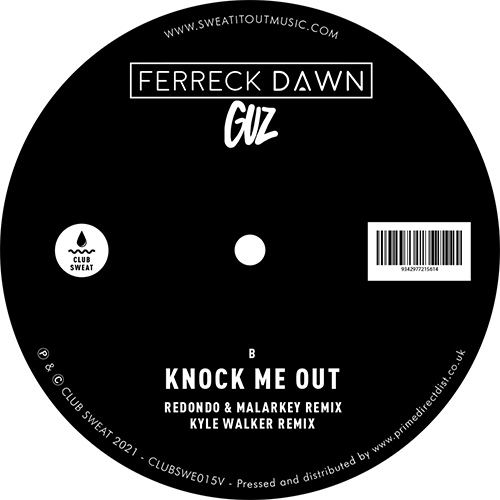 FERRECK DAWN / GUZ - KNOCK ME OUT

Boasting sunshine-inspired disco flavours throughout, with a pumping bassline and lush vocals, this one has us dreaming of parties in the sun with our hands in the air. Remixes from Flashmob, Redondo & Malarkey and Kyle Walker.

Ferreck Dawn has been active as a dj / producer for 13 years now. Recently signed to Spinnin records, his latest release Love Too Deep made it into the top regions of the Beatport Deephouse charts for months and got high rotation airplays on big radio stations like BBC Radio 1 and Kiss FM. With remixes for big shots like Martin Garrix, Sander van Doorn and Steve Aoki, quality releases plus numerous international gigs, 2014 has been a defining year for Ferreck. Roll on 2015! Freek Coppens (aka Ferreck Dawn) has been active as a DJ and producer for over 13 years now. His productions -- released on well-known labels like Spinnin’ Records, Toolroom, Material, Nervous, and Hey records -- have been supported by DJs like Luciano, Carl Cox, Dubfire, Mark Knight, Davide Squillace, Matthias Tanzmann, Nic Fanciulli, Paco Osuna, Maceo Plex, Laurent Garnier, The Magician and even big guns like Steve Angello, Chuckie, Pete Tong and Tiësto. Last year Ferreck teamed up with Redondo, and together they released ‘Tattoo Girl’ on Material records. This tune became the best-selling track of the label in 2013 and made it into the Beatport Tech House Top 10 for several weeks in a row. Recently they released the official follow up to ‘Tattoo Girl’ -- ‘Love Too Deep’. The melodic hit has resided in the Beatport Deep House Top 10 for an impressive 3 months in a row and is taking over the airwaves with radio stations like BBC Radio 1, Tiesto supporting and Slam FM declaring the track a Grandslam. As a solo artist, Ferreck Dawn has had charting releases on Spinnin’ Records, Toolroom, and Nervous Records; features on multiple Sensation Compilations; and remixes for Martin Garrix, Sander van Doorn, DVBBS, Sander Kleinenberg, Funkerman, and René Amesz. The success hasn’t gone unnoticed. Spinnin’ Records, one of the biggest dance labels and home to Martin Garrix, Sander van Doorn and Oliver Heldens amongst others, recently signed Ferreck exclusively. With a lot of new tracks and remixes in the pipeline, and upcoming performances in countries like Romania, Sweden, United Kingdom, Spain and Greece, 2014 is going to be the year that Ferreck Dawn takes it to the next level. Contact: info@musicallstarsmgmt.com Facebook: https://www.facebook.com/pages/Ferreck-Dawn/137558552959142?ref=hl SC: https://soundcloud.com/freekcoppens Twitter: http://www.twitter.com/ferreckdawn Youtube: https://www.youtube.com/channel/UC16R5VTCrRTS3ouGQosiXwQ Website: http://www.ferreckdawn.com Read more on Last.fm. User-contributed text is available under the Creative Commons By-SA License; additional terms may apply.

Olifr M. Guz is a singer/songwriter from Schaffhausen, Switzerland. He is also the singer of Die Aeronauten. Read more on Last.fm. User-contributed text is available under the Creative Commons By-SA License; additional terms may apply.
FREE SHIPPING ON ORDERS OVER £100 TO UK MAINLAND ONLY
See exclusions
View Cart