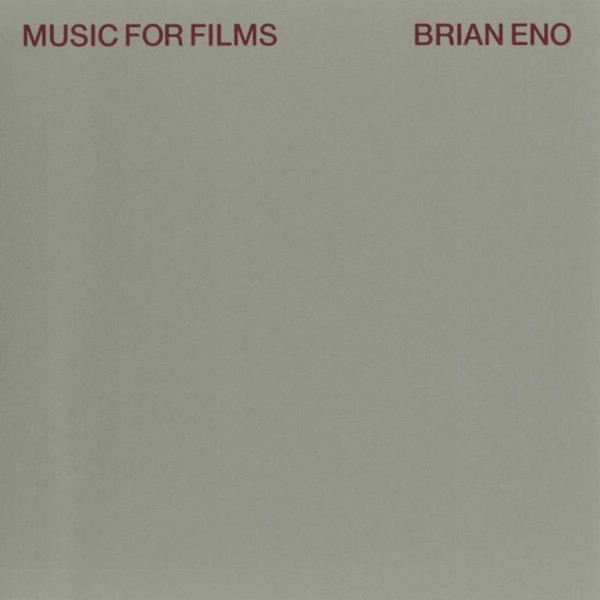 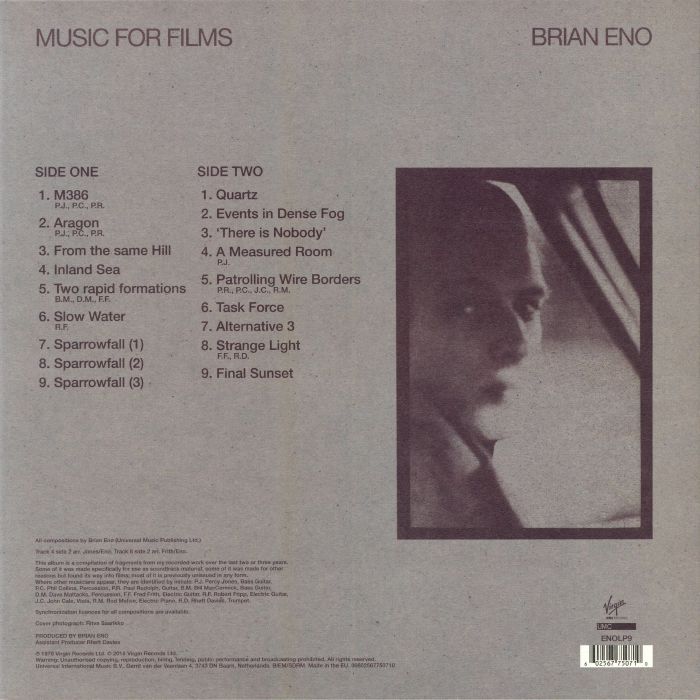 The basic core of tracks making up Brian Eno's Music for Films was originally assembled in 1976 for inclusion in a promotional LP of prospective cues sent to film directors. In early 1978, a bit before Music for Airports, Editions EG released Music for Films with little more than Eno's cryptic comment: "some of it was made specifically for soundtrack material, (and) some of it was made for other reasons but found its way into films." As with most things Eno, this led to a good deal of speculation and controversy. One filmmaker long ago stated, "All of that is crap -- this music was never used in any films," and another film student who had tried out some of the cues: "this is the worst music for films ever. These cues don't synch to anything." However, the second filmmaker unintentionally discovered the essence of Music for Films -- the 18 pieces here are little films, stimulating the visual part of one's brain and thus fulfilling their promotional purpose. In that sense, Music for Films was revolutionary in 1978.

Eno's analog music definitely benefits from presentation in the digital domain. The American LP of Music for Films was terrible, crackly sounding, and impossible to track properly. In this new Original Masters "Soundtracks Works" edition, this additional layer of sonic sludge is gone, revealing that the musical textures are simpler than they seemed on the vinyl, rendering details previously inaudible, such as the bass line in Two rapid formations. This CD offers only the same 40 minutes of music issued in 1978 -- "extras" are included on the newly compiled companion disc More Music for Films. The pieces are quite short; some, such as Sparrowfall (1) could have gone longer without wearing out their welcome. The upside is that Music for Films can function as "ambient music for people with short attention spans" -- somewhat oxymoronic, as ambient music is not designed to be paid attention to.

The mid-'70s were still a rather angry period in electronic music at the academic level. Eno's approach differed significantly from both that, and from others, in that his music was not pop-oriented either. Music for Films is the unrecognized link between Discreet Music and Music for Airports -- it is essential Eno, and a landmark collection drawn from among his work.

Brian Peter George St John le Baptiste de la Salle Eno, RDI (born Brian Peter George Eno, 15 May 1948) is an English musician, record producer, visual artist, and theorist best known for his pioneering work in ambient music and contributions to rock, pop, and electronica. A self-described "non-musician", Eno has helped introduce unique conceptual approaches and recording techniques to contemporary music. He has been described as one of popular music's most influential and innovative figures. Born in Suffolk, Eno studied painting and experimental music at the art school of Ipswich Civic College in the mid 1960s, and then at Winchester School of Art. He joined glam rock group Roxy Music as synthesiser player in 1971. After recording two albums with Roxy Music, he departed in 1973 to record a number of solo albums, coining the term "ambient music" to describe his work on releases such as Another Green World (1975), Discreet Music (1975), and Music for Airports (1978). He also collaborated with artists such as Robert Fripp, Cluster, Harold Budd, David Bowie on his "Berlin Trilogy", and David Byrne, and produced albums by artists including John Cale, Jon Hassell, Laraaji, Talking Heads and Devo, and the no wave compilation No New York (1978). Eno has continued to record solo albums and work with artists including U2, Laurie Anderson, Grace Jones, Slowdive, Coldplay, James Blake, and Damon Albarn. Dating back to his time as a student, he has also worked in media including sound installations and his mid-70s co-development of Oblique Strategies, a deck of cards featuring cryptic aphorisms intended to spur creative thinking. From the 1970s onwards, Eno's installations have included the sails of the Sydney Opera House in 2009 and the Lovell Telescope at Jodrell Bank in 2016. An advocate of a range of humanitarian causes, Eno writes on a variety of subjects and is a founding member of the Long Now Foundation. In 2019, Eno was inducted into the Rock and Roll Hall of Fame as a member of Roxy Music. Eno is frequently referred to as one of popular music's most influential artists. Producer and film composer Jon Brion has said: "I think he's the most influential artist since the Beatles." Critic Jason Ankeny at AllMusic argues that Eno "forever altered the ways in which music is approached, composed, performed, and perceived, and everything from punk to techno to new age bears his unmistakable influence." Eno has spread his techniques and theories primarily through his production; his distinctive style informed a number of projects in which he has been involved, including Bowie's "Berlin Trilogy" (helping to popularize minimalism) and the albums he produced for Talking Heads (incorporating, on Eno's advice, African music and polyrhythms), Devo, and other groups. Eno's first collaboration with David Byrne, 1981's My Life in the Bush of Ghosts, pioneered sampling techniques that would prove to be influential in hip-hop, and broke ground by incorporating world music into popular Western music forms. Eno and Peter Schmidt's Oblique Strategies have been used by many bands, and Eno's production style has proven influential in several general respects: "his recording techniques have helped change the way that modern musicians;– particularly electronic musicians;– view the studio. No longer is it just a passive medium through which they communicate their ideas but itself a new instrument with seemingly endless possibilities." Whilst inspired by the ideas of minimalist composers including John Cage, Terry Riley and Erik Satie, Eno coined the term ambient music to describe his own work and defined the term. The Ambient Music Guide states that he has brought from "relative obscurity into the popular consciousness" fundamental ideas about ambient music, including "the idea of modern music as subtle atmosphere, as chill-out, as impressionistic, as something that creates space for quiet reflection or relaxation." His groundbreaking work in electronic music has been said to have brought widespread attention to and innovations in the role of electronic technology in recording. Pink Floyd keyboardist Rick Wright said he "often eulogised" Eno's abilities. Eno's "unconventional studio predilections", in common with those of Peter Gabriel, were an influence on the recording of "In the Air Tonight", the single which launched the solo career of Eno's former drummer Phil Collins. Collins said he "learned a lot" from working with Eno. Both Half Man Half Biscuit (in the song "Eno Collaboration" on the EP of the same name) and MGMT have written songs about Eno. LCD Soundsystem has frequently cited Eno as a key influence. The Icelandic singer Björk also credited Eno as a major influence. Mora sti Fotia (Babies on Fire), one of the most influential Greek rock bands, was named after Eno's song "Baby's on Fire". In 2011, Belgian academics from the Royal Museum for Central Africa named a species of Afrotropical spider Pseudocorinna brianeno in his honour. Read more on Last.fm. User-contributed text is available under the Creative Commons By-SA License; additional terms may apply.
FREE SHIPPING ON ORDERS OVER £100 TO UK MAINLAND ONLY
See exclusions
View Cart