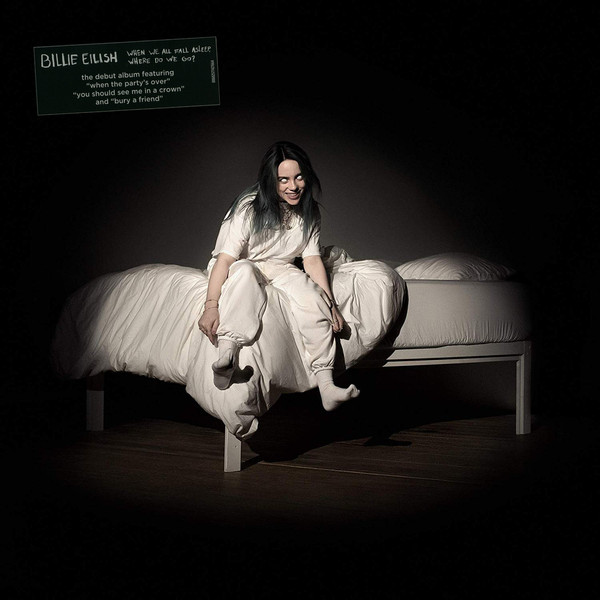 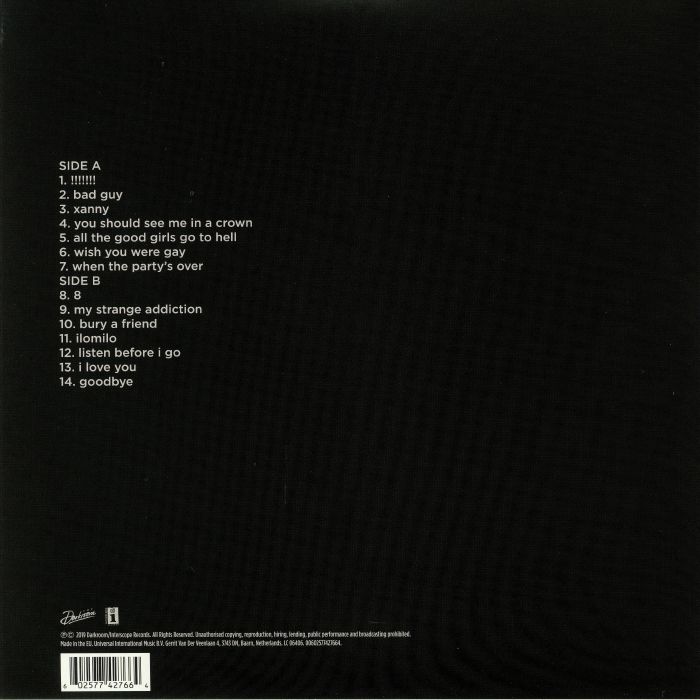 EILISH, BILLIE - WHEN WE ALL FALL ASLEEP, WHERE DO WE GO?

With a youthful, hybrid blend that incorporates elements of indie electronic, pop, and hip-hop (assisted by brother Finneas O'Connell), When We All Fall Asleep, Where Do We Go? captures the late-2010s zeitgeist by throwing conventional boundaries to the wind and fully committing to its genre-blurring self. Like Lorde's devilish little sister, Eilish delivers her confessional lyrics in hushed bursts of breath, at times dirge-like in their sedateness and otherwise intensely threatening in their creepiness. Beneath the calculated image, she's a highly relatable kid -- not yet of legal voting age at the time of the album's release -- and an avatar for an audience that deals with similar mental health struggles and growing pains.

From the opening line of hilarious opener "!!!!!!!," Eilish makes it clear that she is just like you, the listener, goofing off in the studio with her brother while she's supposed to be recording her major-label debut. As endearing as it is obnoxious, the track sets the tone and, from there, the album is a thrill. Bouncing from infectious dance-pop highs to tender, restrained lows, Eilish manages effortless cohesion, even within the span of a single song. "Bad Guy" throbs like the cavernous echo heard outside the club, sparking to life with a K-pop brightness before descending with a bellowing trap drop, while "All the Good Girls Go to Hell" rides a playful bass strum that manages to pull some G-funk effects into its orbit. The meme-worthy "My Strange Addiction" makes the inspired choice to interpolate dialogue from the "Threat Level Midnight" episode of The Office (which had already wrapped its entire televised run before Eilish even turned 12), all while managing to be one of the sleekest standouts on the album. Other highlights include the hypnotic minimalist single "Bury a Friend," an unnerving nightmare that is as disturbing as it is addictive; the twisted funhouse electro-pop "Ilomilo"; and "You Should See Me in a Crown," a spiritual descendant of Lorde's "Royals" that finds Eilish making a power grab to rule the one-horse "nothing town" instead of simply complaining about it. While empowering and vulnerable messages bleed through every song, the quieter moments allow her introspection to take the spotlight, especially on the restrained trio that closes the album. She contemplates ending her life on the swelling, piano-centric "Listen Before I Go" and offers an uncomfortably uncertain conclusion with "Goodbye," but it's the swelling storm of "I Love You," a heartbreaking acoustic beauty, that pegs Eilish as something more than a spooky, scare-the-parents gimmick. Indeed, with When We All Fall Asleep, Where Do We Go?, she demonstrates that she can do it all, hinting at a bright future that could truly go in any direction, as messy and hopeful as youth can get.

Billie Eilish Pirate Baird O'Connell (born December 18, 2001), known professionally as Billie Eilish, is a Grammy Award-Winning American singer and songwriter signed to Interscope Records. California singer and dancer debuted her ethereal indie electro-pop sound when she was barely a teenager. Born and raised in Los Angeles, Eilish grew up in a household of actors and musicians and was homeschooled along with her brother Finneas O'Connell (the Slightlys). At the age of eight, she joined the Los Angeles Children's Choir, developing the soulful vocals that would later appear on her early singles. After the release of "Six Feet Under" and "Fingers Crossed," Eilish made her breakthrough with "Ocean Eyes," produced and co-written with her brother Finneas and released by Interscope. It surpassed 14 million online streams and spawned a number of remixes with Astronomyy, Blackbear, and Goldhouse. Eilish followed up in February 2017 with "Bellyache," then landed another track, "Bored," on the Netflix series 13 Reasons Why. An EP, dont smile at me, featuring the singles "COPYCAT" and "watch," followed later that summer. Her debut full-length album titled "When We Fall Asleep, Where Do We All Go?" has been released March 29th, 2019 via Interscope Records. On January 26, 2020, she won five Grammys, including the "big four" awards: Best Album, Best Record, Best Song, and Best New Artist. On February 18th 2020, she won a Brit Award for International Female Solo Artist and for the first time performed her new Bond theme song "No Time To Die" and was joined by composer Hans Zimmer, guitar legend Johnny Marr and her brother Finneas. Eilish is the youngest musician to have ever performed the theme song for a Bond Movie. Read more on Last.fm. User-contributed text is available under the Creative Commons By-SA License; additional terms may apply.
FREE SHIPPING ON ORDERS OVER £100 TO UK MAINLAND ONLY
See exclusions
View Cart