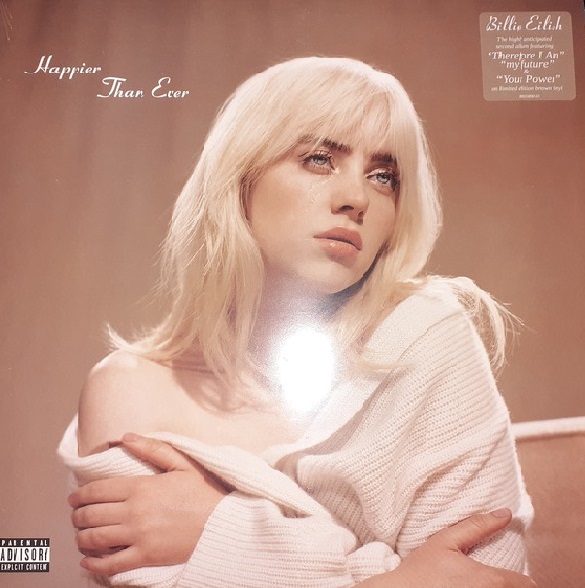 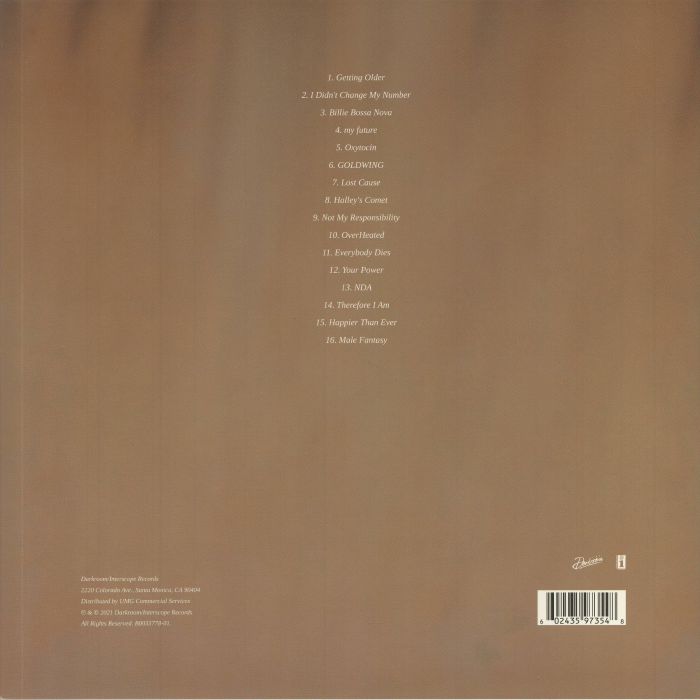 EILISH, BILLIE - HAPPIER THAN EVER

Continuing the tradition on from her multi-GRAMMY Award, record-breaking debut album 'WHEN WE ALL GO TO SLEEP, WHERE DO WE GO?', 'Happier Than Ever' features no outside songwriters or producers, and was written by 19-year-old Billie Eilish and her brother Finneas who produced the album in Los Angeles.

Billie Eilish has fast become one of the biggest stars to emerge since the release of her debut single 'ocean eyes,' and continues to shatter the ceiling of music with her genre-defying sound. Fast forward from her humble breakout in 2015, Billie's album 'WHEN WE ALL FALL ASLEEP, WHERE DO WE GO?' debuted at No. 1 on the Billboard 200 in the U.S as well as 17 additional countries around the world upon release, and was the most streamed album of 2019. 'WHEN WE ALL FALL ASLEEP, WHERE DO WE GO?' was written, produced and recorded entirely by Billie Eilish and brother Finneas in their childhood home of Los Angeles. Billie Eilish went on to make history as the youngest artist to receive nominations and win in all the major categories, at the 62nd GRAMMY Awards, receiving an award for Best New Artist, Album of the Year, Record of the Year, Song of the Year, and Best Pop Vocal Album. Billie Eilish is also the youngest artist to write and record an official James Bond theme song, 'No Time to Die.' Most recently, Billie Eilish was nominated for four additional awards at the 63rd Annual GRAMMY Awards in 2021, and took home both Record of the Year for 'everything i wanted,' and Best Song Written For Visual Media for 'No Time to Die.'

Billie Eilish Pirate Baird O'Connell (born December 18, 2001), known professionally as Billie Eilish, is a Grammy Award-winning American singer and songwriter signed to Interscope Records. Born and raised in Los Angeles, Eilish grew up in a household of actors and musicians and was homeschooled along with her brother Finneas O'Connell. At the age of eight, she joined the Los Angeles Children's Choir, developing the soulful vocals that would later appear on her early singles. After the release of "Six Feet Under" and "Fingers Crossed," Eilish made her breakthrough with "Ocean Eyes," produced and co-written with Finneas and released by Interscope. It surpassed 14 million online streams and spawned a number of remixes with Astronomyy, Blackbear, and Goldhouse. Eilish followed up in February 2017 with "Bellyache," then landed another track, "Bored," on the Netflix series 13 Reasons Why. An EP, dont smile at me, featuring the singles "COPYCAT" and "watch," followed later that summer. Her debut full-length album When We Fall Asleep, Where Do We All Go? was released March 29th, 2019 via Interscope Records. On January 26, 2020, she won five Grammys, including the "big four" awards: Best Album, Best Record, Best Song, and Best New Artist. On February 18th 2020, she won a Brit Award for International Female Solo Artist and for the first time performed her new James Bond theme song "No Time to Die," joined by composer Hans Zimmer, guitar legend Johnny Marr and Finneas. Eilish is the youngest musician to have ever performed the theme song for a Bond film. Read more on Last.fm. User-contributed text is available under the Creative Commons By-SA License; additional terms may apply.
FREE SHIPPING ON ORDERS OVER £100 TO UK MAINLAND ONLY
See exclusions
View Cart