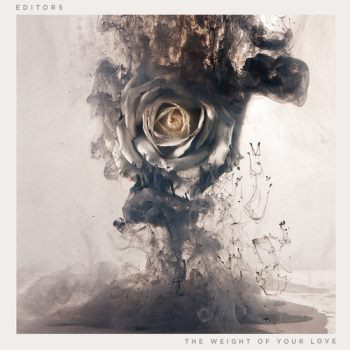 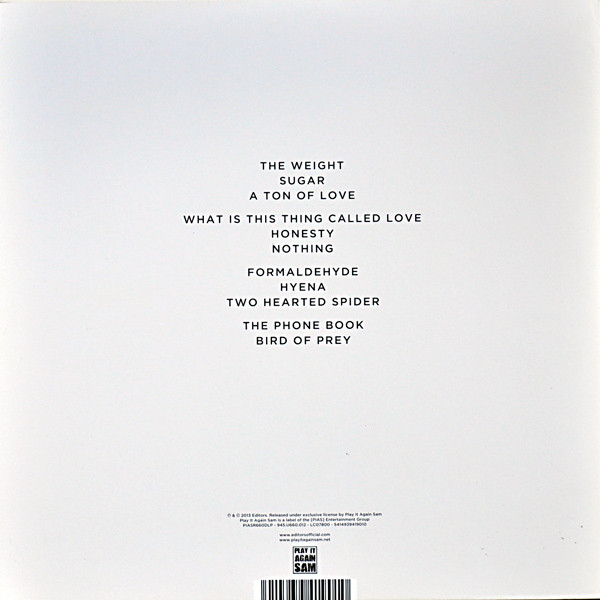 EDITORS - THE WEIGHT OF YOUR LOVE

- NEW RELEASE
Sorry, this item is currently unavailable.
ARTIST:
Editors
TITLE:
The Weight Of Your Love
LABEL:
Play It Again Sam
CATNO:
PIASR660DLP
STYLE:
Rock /
FORMAT:
Vinyl record
DESCRIPTION:
2x12" Rock LP Inc Free Cd OF The LP - Back Again By Demand - The new Editors record is entitled 'The Weight of Your Love'. Recorded at Nashville's Blackbird Studio and produced by Jacquire King (Tom Waits, Kings of Leon), 'The Weight of Your Love' is released by Play It Again Sam. Clint Mansell is also credited with production duties on 'Nothing'. 'The Weight of Your Love' is the group's first album featuring new members Justin Lockey and Elliott Williams, and the first to be recorded without Editors co-founder and former lead guitarist Chris Urbanowicz, who left the band last year.

1) Editors is a British indie rock/post-punk revival band from Birmingham, England, formed by Tom Smith (vocals, guitar, keyboards), Russell Leetch (bass) Ed Lay (drums) and Chris Urbanowicz (guitar) who met while studying at Staffordshire University, in Stafford, England, United Kingdom during 2002. After Chris' departure in 2012 , Justin Lockey and Elliott Williams joined the band for their live gigs and participated in the recording of the fourth album. The band were originally known as (The) Pride, before they changed their line-up and became known as Snowfield, becoming a popular unsigned band. They remained with this name until they signed with Kitchenware Records in September 2004. The band's debut single Bullets was released as a limited edition of 500 on Kitchenware Records on January 24, 2005; it quickly gained support from radio stations such as Xfm and BBC 6 Music - where it was the single of the week. Their debut album, The Back Room, was released on 25 July 2005, to critical acclaim. The band toured out most of 2005, including two jaunts with We Are Scientists. However, after a pivotal support slot on Franz Ferdinand's Arena tour at the end of 2005, it was the re-release of single Munich in January 2006 that propelled them into the top 10 of the UK single's chart. The following May, Editors played three sell-out shows at London's Brixton Academy, and countless gigs worldwide. The album has now sold over 500,000 units. In June 2007 Editors released a second album, An End has a Start which included the single Smokers Outside The Hospital Doors. This first track was released on June 18th 2007 in the UK, and June 26th in the US, however it was leaked onto the Internet earlier. The album's title track, An End Has A Start was released on September 3rd, The Racing Rats on November 26th, 2007. Following a landmark appearence on The Other Stage at the Glastonbury festival, the album entered at number 1 in the UK album chart. 'In this Light And On This Evening', the third studio album, was released on October 12th 2009. With the heavy synthesizer sound and industrial ring, the album differed immensely from the earlier work of the band. Tom explained this change as a way for the band to try something completely different. Papillon, the first single, was followed by You Don't Know Love. The third single was Eat Raw Meat = Blood Drool. The album was inspired by the city of London, both lyrically as musically and debuted at number 1 in the UK album charts. On April 16th 2012, during the recording of their fourth studio album with producer Flood, Editors announced that Chris Urbanowicz (guitar) was leaving the band basing the decision entirely upon the band's future musical direction. ‘The Weight Of Your Love’, their fourth studio LP, was released on July 2013. It was preceded by the single 'A ton of love, released in May. This is also the first album to feature new band members Justin Lockey and Elliott Williams. It was recorded at Blackbird Studio in Nashville with producer Jacquire King and mixed by Craig Silvey. http://editorsofficial.com 2) A punk rock band from Connecticut, active in the 80's. Read more on Last.fm. User-contributed text is available under the Creative Commons By-SA License; additional terms may apply.
FREE SHIPPING ON ORDERS OVER £100 TO UK MAINLAND ONLY
See exclusions
View Cart