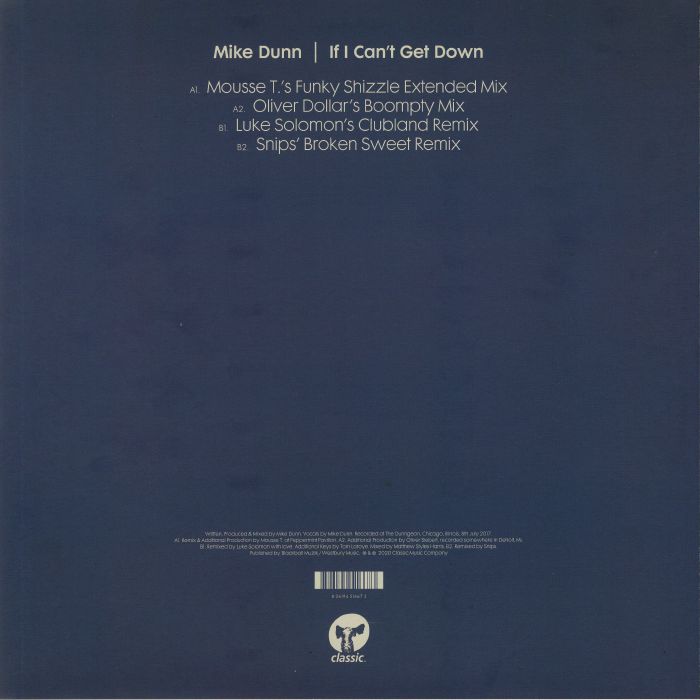 - NEW RELEASE
Sorry, this item is currently unavailable.
ARTIST:
Dunn, Mike
TITLE:
If I Can't Get Down
LABEL:
Classic
CATNO:
CMC238
STYLE:
Deep House / Chicago House / Jackin House /
FORMAT:
Vinyl record
DESCRIPTION:
Deep House Monster 4 Track EP Of Vocal Monsters - When Mike Dunn released his Classic Music Company debut ‘My House From All Angles’ last year, the album was met with critical acclaim, The Guardian writing: “God may have made him funky, but Mike Dunn has kept it going ever since.” Now, he releases one of the stand out cuts from the LP, ‘If I Can’t Get Down’ on a special 12” package, enlisting some of the label’s closest cohorts to remix the irresistible hip-house jam. Up first, P

eppermint Jam boss Mousse T. opens the release, weaving in his signature bouncy melodies and funk-flavoured grooves into the track. Up next, Classic label-mate and house expert Oliver Dollar brings in a raw, edgier sound on his Boomty Mix, with an aptly bumping bassline. On the flip side, Classic label boss Luke Solomon provides his Clubland remix, enlisting funky guitar riffs and energetic percussion. Finally, Livin’ Proof and Barbershop Records founder Snips takes a stripped back approach, highlighting Mike’s unmistakable Windy City drawl with jazzier elements to give the mix a vintage feel. Uniting the worlds of rap and house, Mike Dunn’s ‘If I Can’t Get Down’ is a joyous celebration of what he does best, with this remix package securing its position as a house essential.

Mike Dunn's first album since 1990, 2019's "My House From All Angles", was awash with high-grade Chicago jack-tracks, proper acid workouts and bouncy late-night house. It's one of the latter tracks, the superb "If I Can't Get Down", that's given the remix treatment here. German veteran Mousse T expertly re-invents the track as a squelchy fusion of hip-house and disco-house, while Oliver Dollar tips a wink to Classic's boompty past via a rework that sounds like vintage mid-noughties Derrick Carter. Over on the flip Luke Soloman delivers a low-slung house version that cheekily samples Modern Romance's dub disco classic "Salsa Rhapsody", before Snips Broken Sweet re-imagines Dunn's house workout as a jazzy bruk-up number. As good a set of remixes as we've heard in ages - don't sleep!