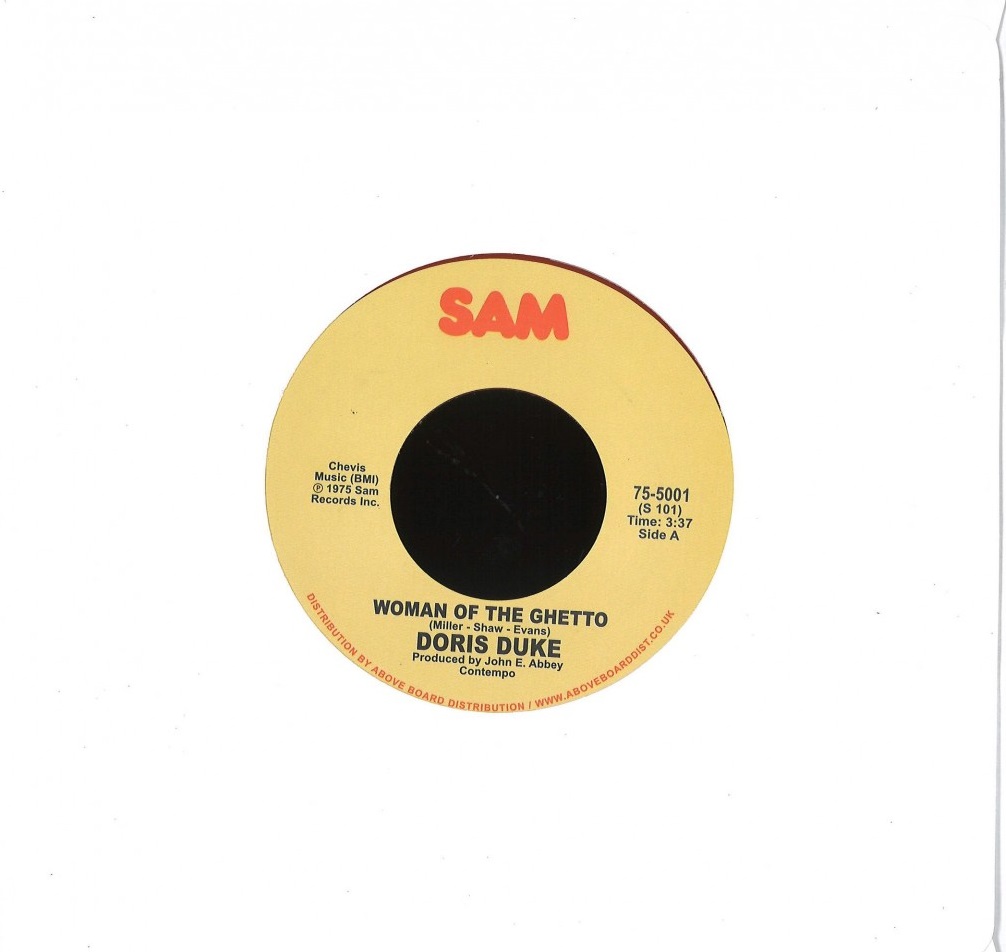 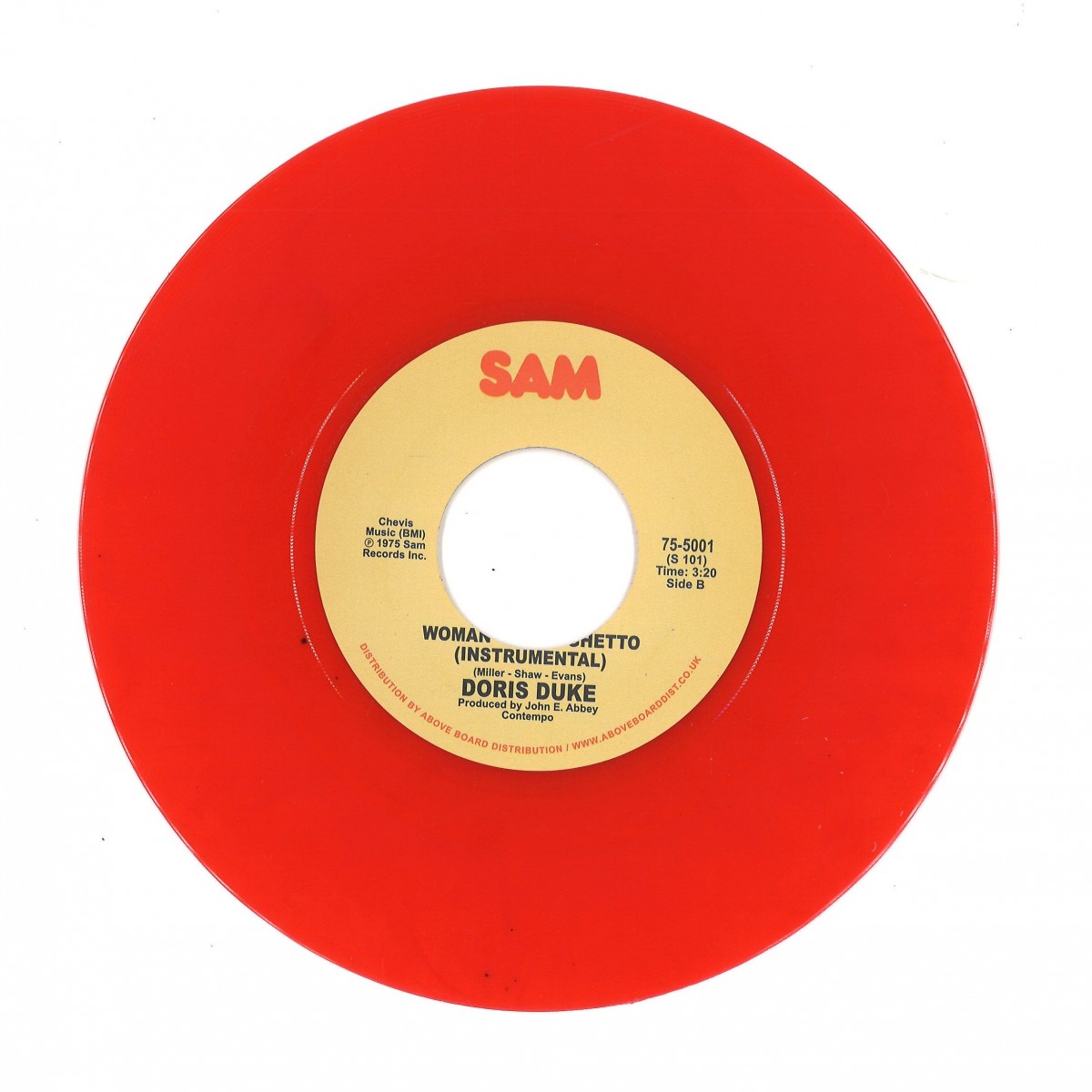 DUKE, DORIS - WOMAN OF THE GHETTO

A truly sought after rare groove, produced by the UK's John Abbey, the man who set up the legendary "Blues & Soul" magazine as well as the Contempo, Mojo and Ichiban labels who worked with countless Soul and Funk artists throughout his lengthly career. Quite tough to track down on 45, "Woman Of The Ghetto" is now available again, dug out from the mighty SAM Records catalogue, the first release in their impressive discography now made available again on dinked 45 as it was presented in 1975, legitimately licensed, remastered and reissued in conjunction with SAM Records New York City.

Doris Duke was born Doris Curry, in Sandersville, Georgia in 1945, although the month isn't known. By 1963, Doris had reached the New York City music scene and was earning a crust as both a session singer and a regular back-up artist at the city's famed Apollo Theatre. 'Running Away From Loneliness', her first single, came out in 1966. Two years later her pairing of 'You Can't Do That' and 'Lost Again', (bonus tracks on the CD) came out on the newly-minted Jay Boy label. (The third bonus track is from the same session, and a further track from the Kassner vaults will appear on a future Kent compilation.) Despite strong promotion in the US trade press, Jay Boy #6001 failed to set the world alight and Doris remained reliant on session work, often commuting to Philadelphia to work with Kenny Gamble and Leon Huff. However, her fortunes were about to change! Step forward Jerry "Swamp Dogg" Williams Jr., who had recently left his artist/producer job at Atlantic Records and was branching out on his own as talent scout, writer, producer and performer - the man of many hats. As he told In The Basement magazine in July 1999 "At Atlantic I was the square peg struggling to fit in the round hole. Phil Walden was building a studio in Macon, Georgia. I called him and proposed a 75/25 partnership in my new production company. His contribution: studio and rhythm section. We agreed and, after a Little Tommy project which went unreleased, came the Doris Duke [I'm A Loser] LP. I damn near lost everything with that one. It was a woman's album; men found it depressing. I walked the streets of New York for six months trying to give it away, then onto Los Angeles. I totally believed in this concept when I walked into Wally Roker's Canyon Records. He played it once and said he had to have it. I damn near paid him. The first release was 'To The Other Woman' [Billboard' R&B #7, Cashbox R&B #5] and the rest is history made of gold." Jerry Williams Jr. had a hand in writing ten of the twelve songs so it must have been largely down to him that "I'm A Loser" was regarded as "a woman's album". He put his ability to write from a woman's point of view down to the fact he grew up surrounded by strong women. "When I'm writing about women," he said in the same interview, "I'm writing with my aunts, my mother, my grandmother and everybody. How they felt, how they acted...my thoughts have a tendency to be seasoned with a female point of view because that's the way I was raised." He could have had no better interpreter of his material than Doris Duke but, before it had a chance Wally Roker's Canyon label suffered financial problems and was about to shut up shop. Doris told David Nathan, in a Blues & Soul interview of 1974, that she had not been happy with the album, deriding it from just about every angle, so perhaps she wasn't too perturbed by the LPs lack of success. Tony Rounce comments in the sleevenotes: "'Just how wrong can one woman be?" How indeed! The "A Legend In Her Own Time" album was cut at Quinvy Recording Studios in Sheffield, Alabama and reunited Doris with the production work of Jerry Williams Jr., but this LP contained far fewer of his songs. Instead she recorded covers of such songs as Buddy Johnson's 'Since I Fell For You' and Jim Webb's 'By The Time I Get To Phoenix'. Released on Mankind, a subsidiary created by Excello for Williams' output, it sadly failed to live up to what one would expect from the title. Doris and Jerry Williams had fallen out and doubtless - whether as cause or effect - the set was poorly promoted. Doris Duke moved on briefly to Mainstream - where only one single was issued - followed by an highly respectable album for John Abbey's UK Contempo label, "Woman", which achieved a US release on Scepter. A subsequent attempt by disco label, Sam, to revive Doris's Contempo recording of Marlena Shaw's 'Woman Of The Ghetto' failed. It was Doris Duke's last released work. Doris Duke has joined the long list of "where are they now?" artists. Over the years, Jerry Williams Jr, has made attempts to find Doris again but to no avail. Perhaps this CD of her finest work will reach her and nudge her into breaking her self-imposed silence. The voice has been under wraps for far too long. Read more on Last.fm. User-contributed text is available under the Creative Commons By-SA License; additional terms may apply.
FREE SHIPPING ON ORDERS OVER £100 TO UK MAINLAND ONLY
See exclusions
View Cart