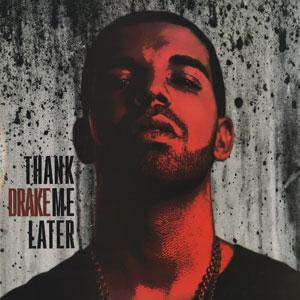 Drake is the Vampire Weekend of rap–he ticks all the wrong boxes, especially for a milieu that privileges poverty and strife. He's a handsome 23-year-old ex-actor from an affluent background who has effortlessly achieved even greater wealth via music that utterly refuses to flaunt its street-tough credentials. More heinous still, Thank Me Later is virtually a concept album about the loneliness and lovelessness of the successful celebrity, a sort of sequel to Kanye West's 808s and Heartbreak, only more audaciously dolorous because he's only just started. In fact, as morose meditations on the miseries of fame go, it comes across like a rap version of Woody Allen's Stardust Memories or Deconstructing Harry.

Aubrey Drake Graham doesn't mean much in the UK, managing only a miserable number 123 for his first single Best I Ever Had late last year, but in the States he's both cause celebre and bête noire. He's had several chart hits while Thank Me Later–which features Alicia Keys, Jay-Z, Mary J Blige, Kanye, Timbaland and his mentor Lil Wayne–has polarised the critics to the extent that its release prompted the Village Voice to run an article entitled Why You Hate Drake, And Why You're Wrong About Hating Drake.

The reason for the extreme reactions is the relentless solipsism evidenced here –Pitchfork's reviewer counted a record number of first-person pronouns for a rap album–and the sustained mood of self-pity. "What am I afraid of? / This is supposed to be what dreams are made of," he asks on The Resistance, wondering, "Am I wrong for making light of my situation?" On Over he finds himself in a room with "way too many people... that I didn't know last year", while on Cece's Interlude he wishes he could go back to being a simple upper-middle-class undergrad: "I just want what I can't have," he sighs.

So much for the haters. Thank Me Later has been rapturously received for its edgily languid sonics. Kayne, Timbaland and Swizz Beatz contribute, but much comes courtesy of Canadians 40 and Boi-1da, who've created a striking dreamscape for Drake to wander with his nasal raps and saccharine croon. No wonder there are shout-outs to everyone from Sade to The xx and Neon Indian on the sleeve–the atmosphere of sumptuous somnolence is interrupted by unexpected drum detonations, guitar bursts and keyboard spikes. This is less chillwave than illwave; Karaoke and The Resistance are like the loveliest muzak, only tortured and twisted by Autechre.

And it never lets up. Credit to all concerned for maintaining it for a whole album, which, if you can buy into Drake's rich-boy blues, ranks with the year's best.

OTHER RELEASES ON AAA RECORDINGS OR BY DRAKE:

We have many other items in stock by Drake and on the label AAA Recordings.