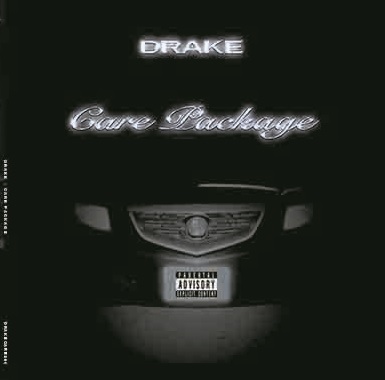 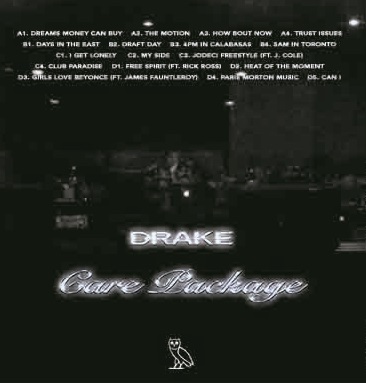 Many of the songs were used as teasers for upcoming projects, dangling out in front of the rabid public to get them excited. Ironically a lot of those tracks proved to be just as good as those actually used on the albums themselves. While that might have been disappointing to people wondering why they weren't included at the time, it does mean that Care Package is a surprisingly strong collection. It gathers up pounding, angry tracks like "Dreams Money Can Buy" from 2011 that shows Drake's rap skills were always sharp, lots of atmospheric late-night R&B, a bit of freewheeling hip-hop, and some slickly smooth balladry as on "Heat of the Moment." The tracks range from dark and introspective to loose and humorous ("Draft Day") with some biting diss tracks ("4pm in Calabasas," which rips on Puffy, Meek Mill, and Joe Budden), crooning remakes of TLC's "Fan Mail" ("I Get Lonely") and the Destiny's Child song "Say My Name" ("Girls Love Beyoncé"), and some avant-garde R&B ("My Side"). Through it all, the familiar Drake tropes (his self-belief, his rise from nowhere to the top, his broken heart and disdain for the people who did him wrong) are front and center, but unlike on recent albums where the sameness of the music and tone makes for difficult listening, the variety of styles, sounds, and beats means that this is one of the more satisfying albums Drake has issued. Despite it being made up of songs that were cast off, leaked, or used as bait, it serves as a kind of shadow career overview that gives a full picture of Drake as a talented, forward-thinking, frustrating, monomaniacal, and important artist.

OTHER RELEASES ON AAA RECORDINGS OR BY DRAKE:

We have many other items in stock by Drake and on the label AAA Recordings.