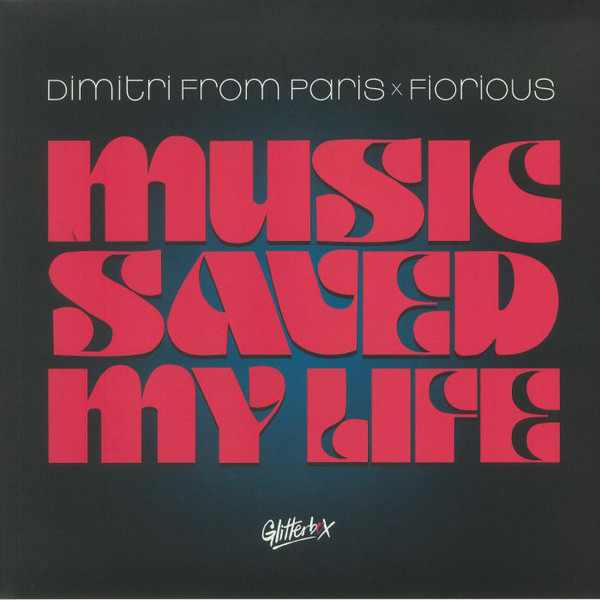 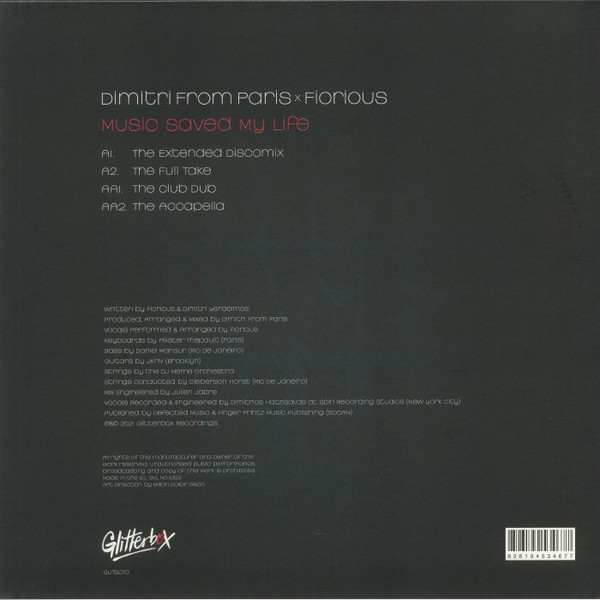 - NEW RELEASE
Sorry, this item is currently unavailable.
ARTIST:
Dimitri From Paris / Fiorious
TITLE:
Music Saved My Life
LABEL:
Gliiterbox
CATNO:
GLITS070
STYLE:
House / Deep House /
FORMAT:
Vinyl record
DESCRIPTION:
Vocal Deep N Soulful House - Rarely does an artist pay homage to the classics quite like Dimitri From Paris, whose illustrious repertoire of original productions and remixes effortlessly capture the essence of the disco greats. After releasing his acclaimed collection of CHIC remixes on Glitterbox Recordings in 2019, Dimitri now partners with NYC singer-songwriter Fiorious, an artist who represents the dawning of a new era in dance music talent, to release ‘Music Saved My Life’ on the label.

With Fiorious’ previous Glitterbox releases including powerful call-to-resistance anthem ‘I’m Not Defeated’ and re-work of Aly-Us’ 90s classic ‘Follow Me’, his impassioned vocal paired with Dimitri’s meticulous production make for a perfect match. A celebration of music’s ability to provide sanctuary and liberate, ‘Music Saved My Life’ encapsulates the ethos of the disco golden era and its modern-day equivalent, Glitterbox. Beautifully brought to life by an international ensemble of over twenty world-class musicians, this is a truly exceptional release from a pioneer of dance, and a future star of the scene, that stands up alongside the disco greats.

Dimitri from Paris (born Dimitri Yerasimos in October 1963) is a French producer and DJ. Contrary to his musical pseudonym, he was born not in Paris but in Istanbul, Turkey. He started out by DJ'ing at the French station Radio 7, before moving on to Skyrock and finally NRJ, one of the top radio groups in France, in 1986. There, he introduced the first ever house music show to be broadcast in France, while simultaneously producing runway soundtracks for fashion houses such as Chanel, Jean-Paul Gaultier, Hermès and Yves Saint-Laurent. He also released two solo EPs from 1993 to 1994, and contributed to the Yellow Productions compilation La Yellow 357. In 1996 Dimitri released his first full album, Sacrebleu. Subtly blending a variety of styles ranging from jazz to samba to house, Sacrebleu sold 300,000 copies worldwide and was named Album of the Year by Mixmag magazine. He followed this up with A Night at the Playboy Mansion and Disco Forever in 2000, My Salsoul in 2001, After the Playboy Mansion in 2002 and most recently Cruising Attitude in 2003. "Love Love Mode", from Sacrebleu, was the template from which "Neko Mimi Mode" and "Tsuku Yomi Mode", the opening themes to the anime "Tsukuyomi Moonphase", were created from. Read more on Last.fm. User-contributed text is available under the Creative Commons By-SA License; additional terms may apply.