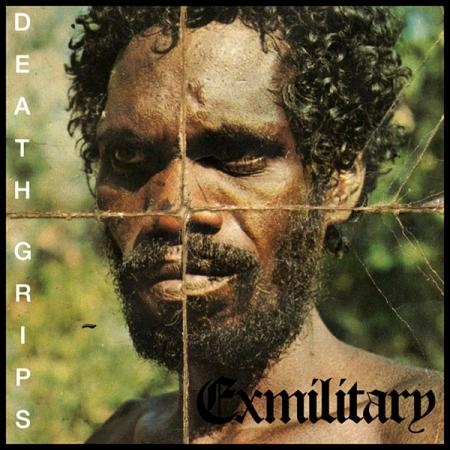 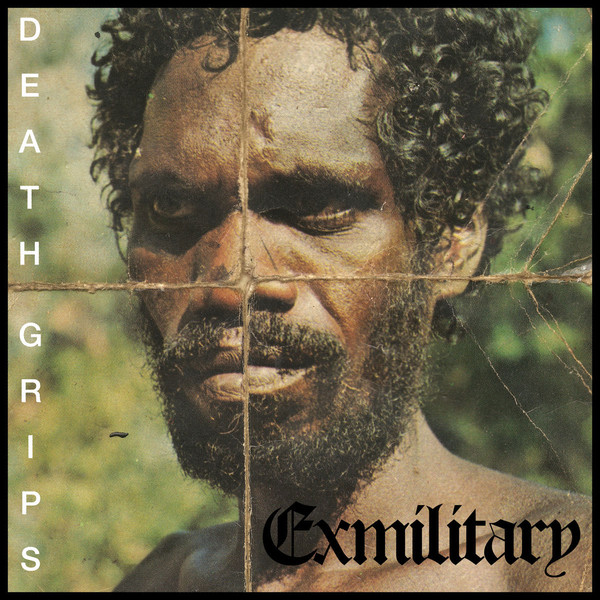 Death Grip's debut project is an unfiltered representation of the band in their purest form. Exmilitary is easily the rawest and most unrefined of the groups releases, with the vocals being screamed at times with such a ferocity that - to quote Micheala Williams, (1966) when commenting on The Velvet Underground - "to experience it is to be brutalized, helpless". The delivery of lines like the chorus of 'Blood Creepin' incite a feeling of violence and power within the listener. This empowerment is as gritty and vice-like as it is sensational, with the albums raw and harsh nature reflecting its lyrical content. Which is dominated by themes of sin, irresponsibility and uncontrolled rage, evident in the often quoted line "Responsibilities' cool, but there's more things in life, like getting your dick, rode all fuckin night". (I want it I need it) Overall the album is made by the experience of listening and the
cruel empowerment that it entices the listener with, this is an album that is perfected by its very flaws, as they simply add to the positive aspects of the experience

Death Grips are an experimental hip hop group formed in Sacramento, California, United States in 2010. The group consists of Stefan Burnett aka Ride (vocals) and the production team Zach Hill and Andy Morin aka A2B2, often miscredited under the alias "Flatlander". Their live setup consists of Burnett on vocals, Morin on keyboards & laptop, and Hill on drums. The group officially formed December 21, 2010, and released its first single and video for "Full Moon (Death Classic)" on March 8, 2011. On April 26, 2011, they released their debut album, the mixtape Exmilitary. NBCNewYork.com called it "an intense, dark listen." On February 27, 2012 Death Grips signed with Epic and released two albums the same year. The first official album, The Money Store, was released on April 24. Music videos were made for the singles "Blackjack," "Get Got," and "Fever (Aye Aye)." The track "Lost Boys" was also released alone with no video accompaniment. After a month and a half long ARG involving the deep web, and a spat with Epic over its release, Death Grips leaked the album No Love Deep Web on its website on October 1st, 2012. This resulted in someone closing down the band's website. The band said it was done by the label, which the label denied shortly. On November 13, 2013, the band spontaneously made available their third LP within two years, Government Plates. The album was posted to their soundcloud page and website, much like No Love Deep Web, but without any sort of lead up or prior hype, except one single, Birds released months beforehand, taking most listeners by complete surprise. On June 8, 2014, Death Grips released the first half of a new double album featuring Björk, The Powers That B. Disc 1 is titled Niggas on the Moon, and features heavy sampling of Björk's vocal snippets. Disc 2 is titled Jenny Death. On July 2, 2014, Death Grips announced on Facebook that they have canceled all tour dates, and are finished as a band, stating: "we are now at our best and so Death Grips is over. we have officially stopped. all currently scheduled live dates are canceled. our upcoming double album "the powers that b" will still be delivered worldwide later this year via Harvest/Third Worlds Records. Death Grips was and always has been a conceptual art exhibition anchored by sound and vision. above and beyond a "band". to our truest fans, please stay legend." On March 24, 2015, Death Grips announced a world tour, confirming the group is currently active. Their double album, The Powers That B was released officially on March 31, 2015. On February 7, 2016 the single "Hot Head" from their upcoming album "Bottomless Pit" was dropped. On March 13, 2016, a video was posted on their official channel of the band being interviewed by Matthew Hoffman. The original audio was removed and replaced with instrumentals made by the band. On March 18, 2016, the band released more information about the upcoming album, Bottomless Pit. The front and back covers were shown as well as the track list. Bottomless Pit was released on May 6, 2016, with "Hot Head" and "Eh" as singles. Music videos were produced for "Eh" and "Giving Bad People Good Ideas". On May 30, 2016, Death Grips released a new track, "More Than the Fairy" featuring musician Les Claypool. On May 22, 2017, Death Grips announced they were working on a new album, while simultaneously releasing a track/mix entitled "Steroids (Crouching Tiger Hidden Gabber Megamix)", featuring 7 new songs. In March of 2018, the trio posted two photos on their Instagram account (@bbpoltergiest) stating that they were working on the new record with Andrew Adamson, the director of the Shrek series, and Justin Chancellor, the bassist from Tool. On March 22, 2018, the band announced on their website (thirdworlds.net) that their new album "Year of the Snitch" was "coming soon..." April 6, 2018, the cover artwork for "Year of the Snitch" is posted on the band's Facebook page. On June 22nd, Year of the Snitch was released accompanied by five singles: Shitshow, Hahaha, Flies, Black Paint and Streaky. Rolling Stone would go on to name Black Paint song of the summer. Read more on Last.fm. User-contributed text is available under the Creative Commons By-SA License; additional terms may apply.

OTHER RELEASES ON AAA RECORDINGS OR BY DEATH GRIPS:

We have many other items in stock by Death Grips and on the label AAA Recordings.