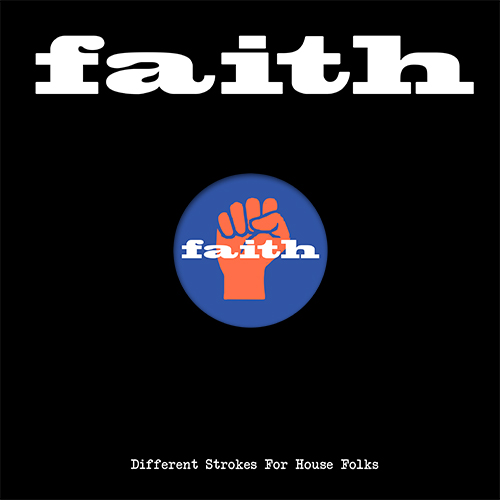 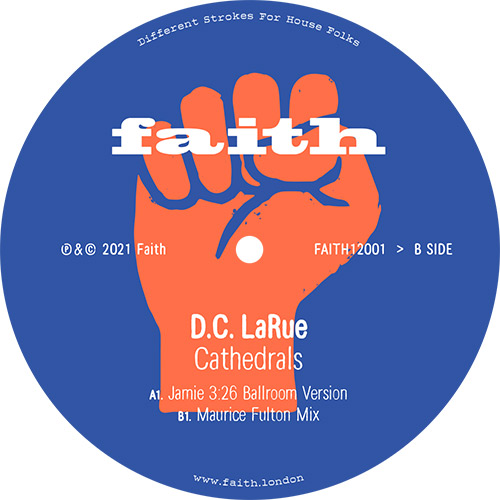 - NEW RELEASE
Sorry, this item is currently unavailable.
ARTIST:
D.C. LaRue
TITLE:
Cathedrals
LABEL:
Faith
CATNO:
FAITH12001
STYLE:
Disco / Soul / Deep House /
FORMAT:
Vinyl record
DESCRIPTION:
2x12" 6 Mixes OF Disco, Soul, Inc New Greg Wilson House Remix - New York City 1976 and D.C. LaRue is dancing at David Mancuso's 'The Loft' party with friends, as they get higher and the atmosphere more intense DC loudly proclaims 'These places are the new cathedrals'. This epiphany sent him straight back to his Manhattan studio where he wrote the seminal Disco anthem that is 'Cathedrals'. A classic that has lasted because of the quality of the song writing and the stunning musicianship.

These mixes (apart from Greg Wilsons Edit) are taken from the original multi tracks that DC and his crew created that hot summer of '76. Maurice Fulton takes a beautifully eccentric leftfield view that drips drama. Chicago's Jamie 3:26 jacks it up chi-style but without ever losing the soulful essence of the track.

Faith's Farley & Jarvis take a different approach choosing to loop the big hooks under some fresh 909 House beats creating what we hope will be a terrace summer anthem. Greg Wilsons edit has been a heads fave for some time but now its remastered on quality vinyl.

D.C. LaRue (born David Charles L'Heureux on April 26, 1948 in Meriden, Connecticut, U.S.A.) is a disco music artist. His music was successful in clubs and on dance music charts worldwide during the 1970s and early 1980s. LaRue's first recording was the 1974 Kirshner Records single "Honey Bear (The Good Time's Right Here)." A second one-off single, 1975's "Move In Closer," was on the Claridge Records imprint. Neither single charted. However the following year his luck changed with the 1976 album Ca-the-drals. The Pyramid Records album rose to #-123 on "Billboard's Hot 200" The double A-side 12" single of "Ca-the-drals" (backed with fellow artist/drummer Pat Lundy's "Day By Day/My Sweet Lord") was one of the earliest commercially available 12" singles. "Ca-the-drals/Deep Dark Delicious Night" would hit #-1 on "Billboard's Dance Music/Club Play Singles" chart. "Ca-the-drals" would also hit #-2 on "Billboard's Disco Singles" chart and #-94 on "Billboard's Hot 100" chart. In less than a year he began work on his second album, The Tea Dance. The 1977 concept album capturing the essence and feel of a Broadway show featured such notable background singers as Lani Groves and Sharon Redd. It also included a duet with 1960s rock/pop icon Lou Christie on "Don't Keep It In The Shadows." The tracks: "Face Of Love," "Overture," "O Ba Ba (No Reino Da Mae Do Ouro)," "Indiscreet" and "Don't Keep It In The Shadows" would all chart at #-2 on "Billboard's Dance Music Club Play Singles" chart. "Indiscreet" would go one to become one of the more important and influential hip hop break tracks of the old skool hip hop eras. Despite the brisk sales of both of LaRue's albums Pyramid Records folded operations in the USA in 1978. With the success of those albums he was easily licensed to Casablanca Records & Filmworks in 1978. His first release on his new label was "Do You Want The Real Thing?" The single was included on the platinum selling soundtrack album for the movie Thank God It's Friday. That same year saw LaRue release his third album Confessions. Once again he scored a hit with "Let Them Dance" which hit #-12 on "Billboard's Dance Music/Club Play Singles" chart. Also in 1978 LaRue had a cameo in the ill-fated movie Sgt. Pepper's Lonely Hearts Club Band. In 1979 he released his fourth album Forces Of The Night. The singles "On With The Dance" (a duet with Michelle Aller) and "Hot Jungle Drums And Voodoo Rhythm" were released and the album charted at #-72 on "Billboard's Dance Music/Club Play Singles" chart. The album also featured a duet with Rita Moreno on "Have A Good Time." "Hot Jungle Drums And Voodoo Rhythm" was also included on the platinum selling compilation "A Night At Studio 54." In 1980 he released his fifth and final album Star Baby. The album retained the spark and ingenuity that had been prevalent in his earlier releases but with the end of the disco era it failed to chart. The album featured another duet with Lou Christie "Into The Ozone" and the 12" single of "So Much For L.A."/"Boys Can't Fake It." In 2006 his "Ca-the-drals" was sampled in England on the track "3 AM" by Moto Blanco (Bobby Blanco & Miki Moto.) The highly successful track would introduce LaRue and his music to a whole new generation. That same year LaRue released Wicked Youth (Selected Performances 1976-1984) from his own website. Besides rare edits of his previous hits the disc also included the previously mentioned "3 AM," "Good Morning, My Love" (with The Boys Choir Of Harlem), "Love Can Make You Strong" (another duet with Lou Christie previously unreleased) and "Edge Of The Night" (with Adam Goldstone.) In 2010, LaRue recorded the new track "Crash And Burn" for the Ian Levine produced compilation album Northern Soul: 2010. In February 2012, LaRue returned with "More Things Change." A Nu Disco genre track he did with artist/producer Jimmy Michaels. As of 2012 LaRue has been the host of his own radio show "Disco Juice" on Newtown Radio. Tributes, themed shows as well as interviews of famed disco artists are his format on the Saturday night show. Read more on Last.fm. User-contributed text is available under the Creative Commons By-SA License; additional terms may apply.
FREE SHIPPING ON ORDERS OVER £100 TO UK MAINLAND ONLY
See exclusions
View Cart