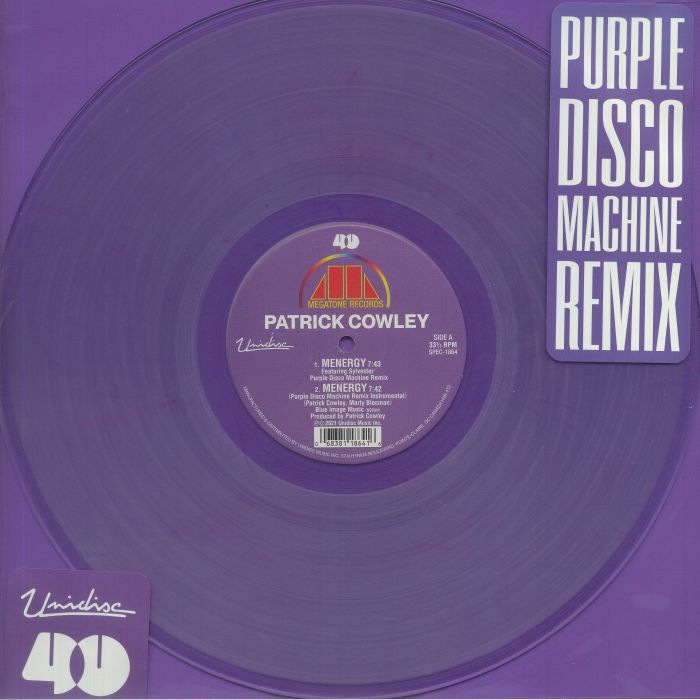 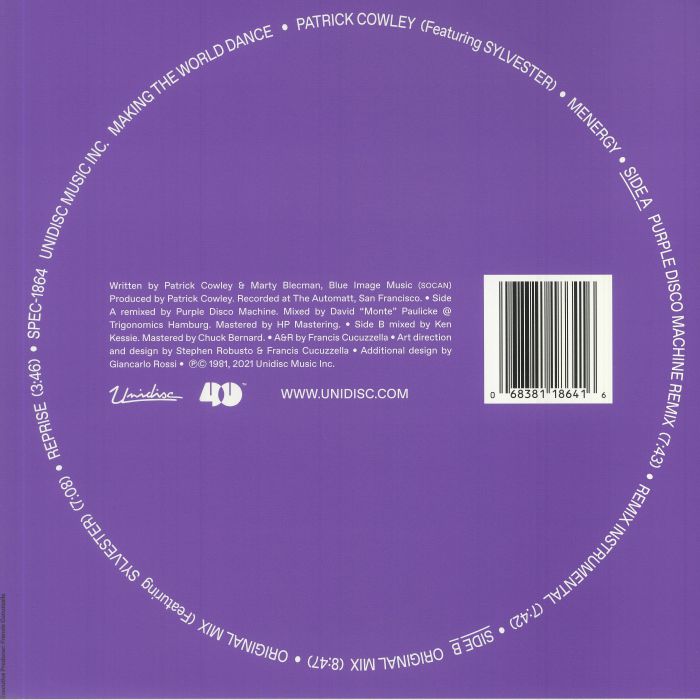 None come much bigger than the pairing of legendary synth alchemist Patrick Cowley and the incredible gay icon Sylvester. 'Menergy' is such a classic record, a slamming piece of HI-NRG funk that will have everybody within the nearest vicinity on the dance-floor in a heartbeat, the sound of early 80's gay San Francisco, unashamed, proud and ridiculously ahead of it's time. Pair this music with the skills of cult producer and editor extraordinaire Purple Disco Machine and you have a potential new classic on your hands! This PDM extended mix is backed with the killer original mix and is undoubtedly an unmissable reissue package beautifully presented by your friends over at Unidisc.

Originally released in 1981, just a year before Cowley's tragic death but heralding the arrival of the Hi-NRG era of electronic disco, it's as brilliant and visionary now as it was at its inception. Now the classic gets a respectful re-touch from Purple Disco Machine, who offers up vocal and instrumental versions on the A side before three original versions stretch out on the flip. The difference between the remixes and originals is subtle, but with ingredients this potent, who's to complain when setting the party aflame?

Patrick Joseph Cowley (b October 19, 1950 Buffalo, New York - d November 12, 1982 San Francisco, California) was a Disco and Hi-NRG dance music composer and recording artist. He recorded in a similar style to Giorgio Moroder, and is often credited with pioneering electronic dance music. Born in Buffalo, Cowley moved to San Francisco in 1971, beginning an intensive study of the synthesizer. Working at the City Disco, as a light technician, he met Sylvester (originally of the Cockettes gay Theatre group) who was there performing. They began to collaborate, and Cowley's aggressive synthesizer style became associated with Sylvester. Their club-dancing fan base responded enthusiastically to hits like "You Make Me Feel (Mighty Real)", "Dance (Disco Heat)", and their most successful single, "Do You Wanna Funk". Cowley's own hits included "Menergy" in 1981, a frank celebration of the gay club sex scene, and "Megatron Man". In 1982, Patrick Cowley became the DJ at the "Menergy" parties at The EndUp in San Francisco. He also wrote and produced the dance single "Right on Target" for San Francisco artist Paul Parker, which reached #1 on the Hot Dance Music/Club Play chart. Cowley also did a 15+ minute long remix of Donna Summer's "I Feel Love", which is now a collector's item. His final album, Mind Warp, was composed as he felt the increasing effects of HIV infection, and its songs reflect his increasing detachment from conventional reality as the disease progressed. Cowley's released work to-date includes six LP full length albums (ranging from Hi-NRG to trance inducing long-form ambient/krautrock synth exploration pieces) and a dozen singles and EPs. Groups including the Pet Shop Boys and New Order cite Cowley's style as a major influence. Patrick died from complications of AIDS on November 12, 1982, an early victim of the disease. Read more on Last.fm. User-contributed text is available under the Creative Commons By-SA License; additional terms may apply.
FREE SHIPPING ON ORDERS OVER £100 TO UK MAINLAND ONLY
See exclusions
View Cart