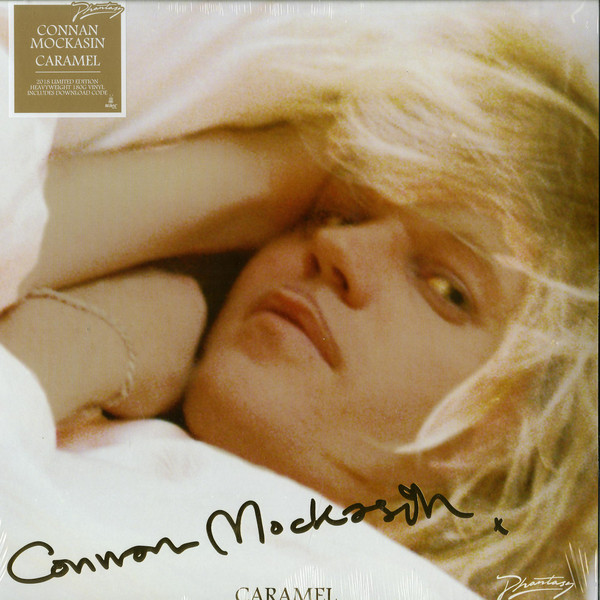 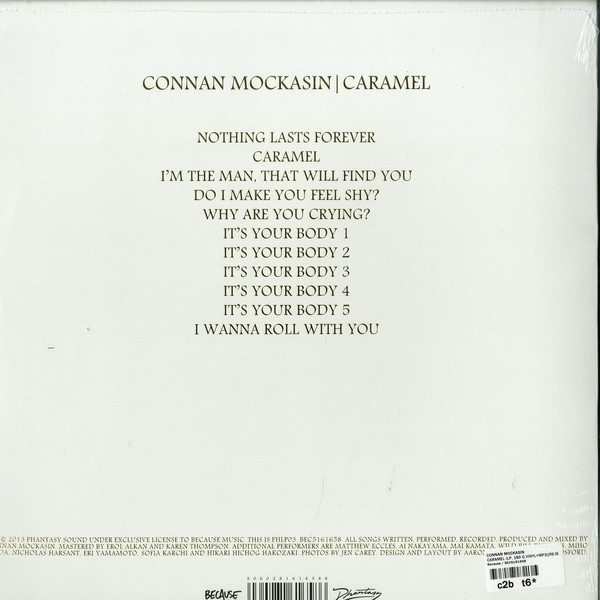 New Zealand via Paris / London pop sprite Connan Mockasin follows up the widely acclaimed oddball-psych of 2010’s 'Forever Dolphin Love'. 'Caramel' boasts a unique brand of mutated, lustrous soul that was almost wholly self-recorded over a month in a Tokyo hotel room. The new album explores different regions of Mockasin’s singular galaxy, guided by his truly adventurous songwriting that favors reconfigured pop structures with a skewed funk sensibility. 'Caramel' offers us not just soul but a liquefied brew of blues, funk, ambient and folk with pronounced Oriental and Gallic timbres, all laced with an uncanny air of bliss... 'Caramel' has hints of Scritti Politti's exquisitely stitched soul, or of Prince - if the Minneapolis legend had spent time in Canterbury, the epicentre of South East England's progressive psych / prog scene during the late 60s and early 70s, where the likes of Syd Barrett and Kevin Ayers began their own musical journeys.

And if that wasn't all enough to get your ears round, then it's a concept album as well, kinds: "The concept is that it's actually an album," says Mockasin. "It starts with the dolphin (from 'Forever Dolphin Love') leaving, and the boss (the man) who is so in with love with the dolphin is sad, and then it kicks into the new album, and he is happier. But there's a car race and a crash."

Connan Mockasin (born Connan Tant Hosford) is a bubble pop/psychedelic pop musician from Te Awanga, New Zealand. Connan originally started a "blues-pop" band whilst living in Wellington, New Zealand, known as Connan and the Mockasins. The group consisted of Connan Hosford (vocals, guitar), Ross Walker (upright acoustic bass) and Seamus Ebbs (drums). In April–May 2006, the band released their second EP, Uuu It's Teasy, and toured New Zealand to promote the album. They played a fundraising New Zealand show in Wellington on 26 May 2006, before relocating to London on the 30th. After a series of concerts in London, the band visited New Zealand again for a national 2006/2007 Summer tour. In 2007, the band moved from London to a village in East Sussex south of England. Ross Walker was replaced by James Milne, of Lawrence Arabia and Reduction Agents fame, on bass guitar. The band then played the CMJ festival in New York. Towards the end of 2007 Ebbs left the band to pursue his career, shortly before Hosford returned to New Zealand for a national tour in 2008 with a new lineup - becoming a solo act under the name 'Connan Mockasin'. In 2008, Connan collaborated with Norman Cook (Fatboy Slim) on a song for the upcoming Brighton Port Authority album. He also finished a tour with Pete & The Pirates and set out on a February tour with Late of the Pier. Connan has also collaborated with musicians Liam Finn and Lawrence Arabia. Finn also contributed to their last album. In 2009, Connan Mockasin started touring with befriended band The Veils through Europe, as well as gigs with Liam Finn and Micachu & the Shapes. In August 2009, Liam Finn performed with a new band called BARB on a small New Zealand tour consisting of Connan Hosford, Lawrence Arabia (James Milne), Eliza Jane Barnes, Seamus Ebbs, Jol Mulholland and Wild Bill Rickets. Their album (recorded at Roundhead Studios in Auckland, New Zealand) is set for release in August 2010. Connan plays a reshaped Stratocaster, similar in looks to a Vox Teardrop. In 2010 Connan embarked on a UK tour with Crowded House, playing huge theatre-like venues with mostly seated areas. This proved an interesting challenge for Connan and his group as most would consider his music much more alternative or left-field than that of Crowded House, although Connan had expressed an interest in playing to seated crowds in places such as libraries or theatres. Connan supported Mystery Jets at their gig on 8 July at Somerset House in London with a line up consisting of Elroy Finn (brother of Liam Finn) on drums, Wild Bill Rickets on percussion and Nick Harsant on bass. That summer the line up (with occasional guests on guitar and keys) played several festival shows such as Latitude Festival and Offset Festival. In 2010 Connan supported Warpaint on some of their UK tour dates. In 2012 Connan supported Radiohead during the Australasian leg of their world tour playing six sell out arena shows, one in Auckland, one in Brisbane and two in Sydney and Melbourne. Connan Mockasin released their first album "Please Turn Me into the Snat" in 2010 on Phantasy Sound, Erol Alkan's record label, and in 2011 on Because Music. The album reached No. 39 on the New Zealand album charts, and received glowing reviews from critics including NME and Drowned in Sound. It was also shortlisted for the 2011 Taite Music Prize. On 28 March 2011 the album was re-released as "Forever Dolphin Love" with a live bonus disc on Phantasy and Because Music. Mockasin has received favorable reviews for his unusual sound and musical style. Label-mate Samuel Dust of Late of the Pier has toured with Connan Mockasin as a backing musician. Mockasin and band have been touring with Charlotte Gainsbourg as her live band after Mockasin composed the song 'Out Of Touch' for her latest album Stage Whisper. Mockasin toured with Radiohead in Australia and New Zealand throughout November 2012, playing sold out shows in Auckland, Brisbane, Sydney and Melbourne. Mockasin released his second album, Caramel, in September 2013. In 2016 he started a side-project Soft Hair with Sam Dust (LA PRIEST / Late of The Pier). In 2018 Connan Mockasin released their third album Jassbusters. Read more on Last.fm. User-contributed text is available under the Creative Commons By-SA License; additional terms may apply.
FREE SHIPPING ON ORDERS OVER £100 TO UK MAINLAND ONLY
See exclusions
View Cart