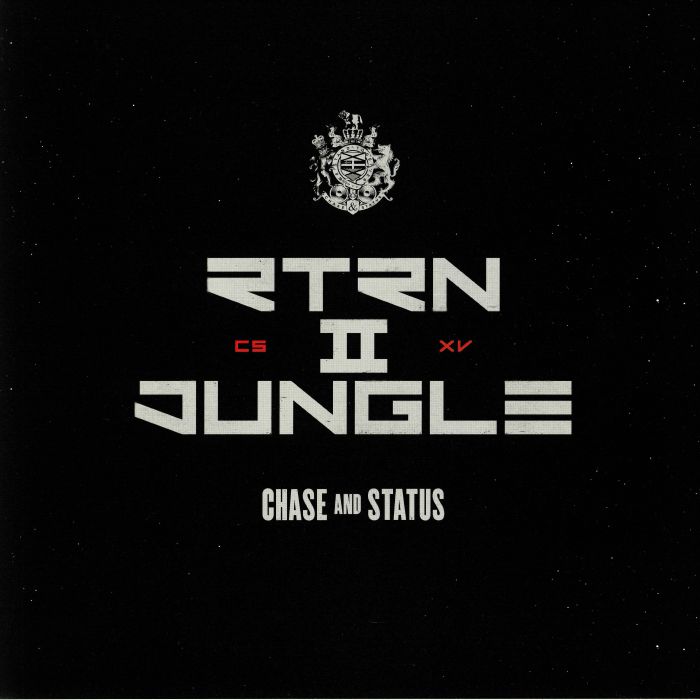 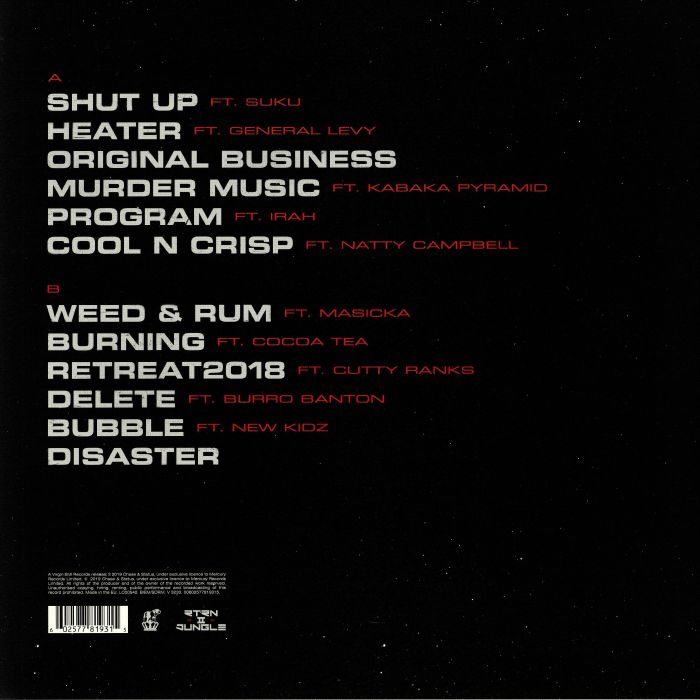 - NEW RELEASE
Sorry, this item is currently unavailable.
ARTIST:
Chase & Status
TITLE:
RTRN II JUNGLE
LABEL:
Virgin
CATNO:
V3233
STYLE:
Jungle / Jungle /
FORMAT:
Vinyl record
DESCRIPTION:
2x12 " Jungle LP - Brand new 12 track album. A huge moment for the trio, "RTRN II JUNGLE" marks fifteen years since the group started releasing music (and nine years since THAT infamous, "Blind Faith" MCR warehouse...) and touring the world. With this landmark moment in mind, Chase and Status have gone back to their roots and their passion - jungle music. The genre that sculpted their career in the 90’s is back, and re-crafted in an authentic way that's both sympathetic to the genre yet up-to-date with modern production standards.

Instead of sampling dancehall, the group have gone back to Jamaica - creating their own new music to sample, and forging an organic and irresistible sound. The sound, project and accompanying documentary and installation revist this classic UK genre, shining a light on its timeless infectiousness and dancefloor slaying force. Recommended!

There are multiple artists with this name: 1. A jazz rock band from the United States 2. A Christian metal band 3. A eurodance group 4. A pop group from Japan 5. A guitarist from Idaho, United States 6. The recording alias of Michael DiMartino 7. A musical group who has release multiple EPs 8. A rapper for Australia 1) Bill Chase was a virtuostic trumpet player who played in the Buddy Rich Big Band and later led his own jazz-rock group "Chase". He and most of his band were tragically killed in a plane crash. 2) Chase was also a Christian Metal group that put out a CD called "In Pursuit" about 1993/1994 on the label "SALT Inc Music." This Chase was made up of Scott Lowmaster (Rhythm Guitar and Lead Vocals), Virgil Burdic (Lead Guitar and Vocals), Ron Chase (Bass Guitar) and Jay Corey (Drums). 3) Eurodance act produced by Tony Verde and Sandro Murru. There were two different female vocalists for Chase. Cindy Wyffels replaced the first one in 1996. Produced eurodance hits such as Love For The Future and Music Is My Life 4) Jpop group featuring Saaya Irie, The jpop group is the artist of the song "CHASE ME!" 5) Chase is also a solo project of Chase Williams, North Idahoan guitarist. 6) Chase is also the stage name of Michael di Martino, a YouTube personality who performs stylised sign-language versions of current pop songs for the deaf community. Based in New York City, di Martino works as a sign language interpreter and has begun recording as a side project. 7) CHASE is also a very unknown band that only EP'S are currently available of 8) Chase is also an underground Australian Hip Hop artist/MC that has recently released an EP "Cut To The Chase" in March 2012 among his other album "Demographix" in Jan 2012 and "The Sik Symptons Sampler" in Jan 2006. Read more on Last.fm. User-contributed text is available under the Creative Commons By-SA License; additional terms may apply.

1- Status is a Spanish Makina act, produced by Xavi Barranquero, Gabriel Va Moreno and Toni Mora. Singles: “Break The Silence”, “No More Pressure” and “The Ballad Of Jet Harris”. 2- Status, also known as Zachary "Status" Young or Zach Young is a Hardcore Hip-Hop/Rap/Rock artist and producer from Denver, Colorado. Status has released several solo albums (Broken Record, Cadava Avenue, Things To Do In Denver When Your Def), dynamic duo albums (Azma & Status: Game Time/You'll Know My Name, "Krookid Hooks & Status: Death Politics Religion and Rap"), Group Efforts ("Bagz Of Dagga: The Number Of The Beast" "Afterlife Allstars: Say Yeah!" and countless collaborative works ("Dokta Rotten: The Fixxx Tape", "P.B.S. (Produced By Status)", "Cadava Recordz: The Tenure" for well over a decade. He is the founder of Cadava Recordz LLC, an independent record label who boasts a slew of Hardcore Rap acts from the Mile High City including Status, Azma, Louie Cypha, Krookid Hooks, Manic and Life the M.C. They almost all have individualy released solo albums, except for Manic- but also form a Hardcore Rock/Rap hybrid group known as the "Afterlife Allstars", Afterlife Allstars will be releasing a highly anticipated debut album likely to hit online distribution retailers well before the end of 2011. Several singles have been pre-released from the project including "Waste of Talent" and "Say Yeah!", the latter also a being shot into an official music video. Another project, "Bagz Of Dagga" consisting of Status, Louie Cypha, Krookid Hooks and Manic released their debut album "Language of the Beast" in 2009. From that album a music video for the track "40 Breaks" was released in 2010. Status has been the sole producer for mostly all the Cadava Recordz entire discography. Read more on Last.fm. User-contributed text is available under the Creative Commons By-SA License; additional terms may apply.
FREE SHIPPING ON ORDERS OVER £100 TO UK MAINLAND ONLY
See exclusions
View Cart