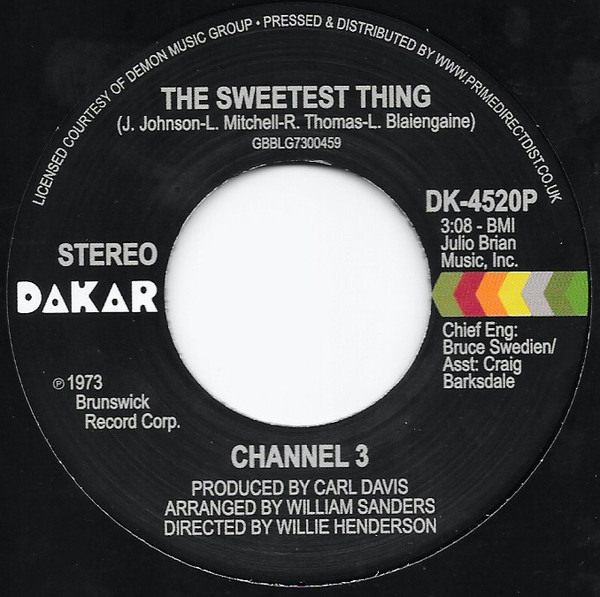 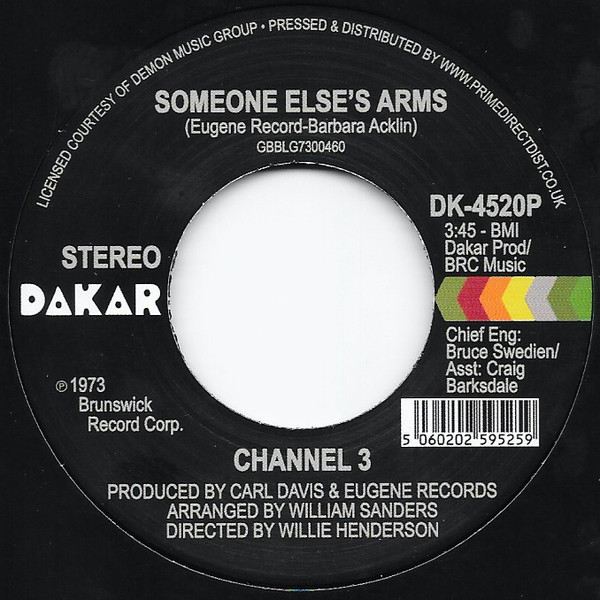 - NEW RELEASE
Sorry, this item is currently unavailable.
ARTIST:
Channel 3
TITLE:
The Sweetest Thing / Someone Else's Arms RSD 2021
LABEL:
Dakar Records
CATNO:
DK4520P
STYLE:
Soul /
FORMAT:
Vinyl record
DESCRIPTION:
Soul Classic Re-issued for RSD 2021 On Ltd Ed 7" - This one-off 1973 release turned out to be the only recordings of Chicago veterans Channel 3. Powered by a brilliant Carl Davis production, a sublime William Sanders arrangement and a sterling Willie Henderson rhythm, 'The Sweetest Thing' is quite simply a masterpiece of Chicago Soul which has become even more popular over the years. A mint original is £250+ these days so this has been long overdue for a 7 Inch release.

Channel 3, also known as CH3, is a punk rock band from Cerritos, California. Part of the Southern California punk scene of the early 1980s, the band had a sound that was more melodic than many of their hardcore contemporaries, and lyrics which ranged from thoughtful and satirical to bratty and self-indulgent. Songs like "You Make Me Feel Cheap" and "Separate Peace" were among the many sampled on punk compilations of the period, and the band's albums were modestly successful in both the U.S. and Europe. Channel 3 centered around the friendship of Mike Magrann (vocals, guitar) and Kimm Gardner(guitar), which dated back to the second grade. Forming in 1980, the foursome included Larry Kelley (bass) and Mike Burton (drums, later replaced by Jack DeBaun). They released an EP, Channel 3, in the summer of 1981 and began playing shows in the Los Angeles area. In the summer of 1982, their first album Fear of Life was released, and the band began their first US tour. After 1983 the band experimented with other styles, alienating many of its original fans. Eventually it returned to its roots, touring Europe in the 1990s and releasing a more punk-oriented CD in 2002. Read more on Last.fm. User-contributed text is available under the Creative Commons By-SA License; additional terms may apply.
FREE SHIPPING ON ORDERS OVER £100 TO UK MAINLAND ONLY
See exclusions
View Cart