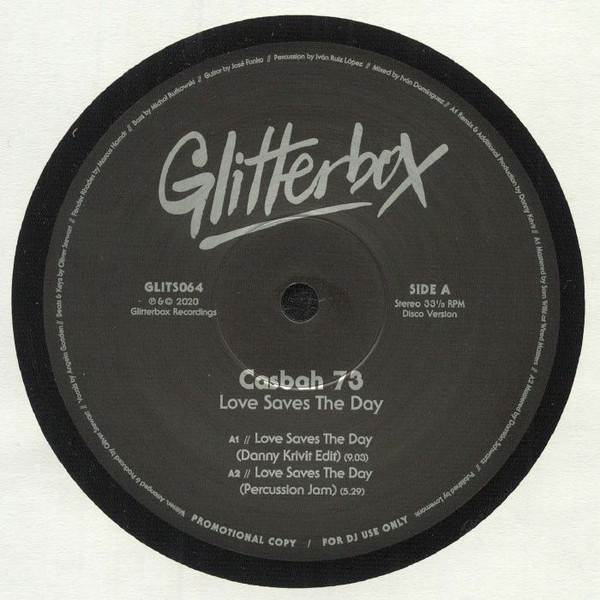 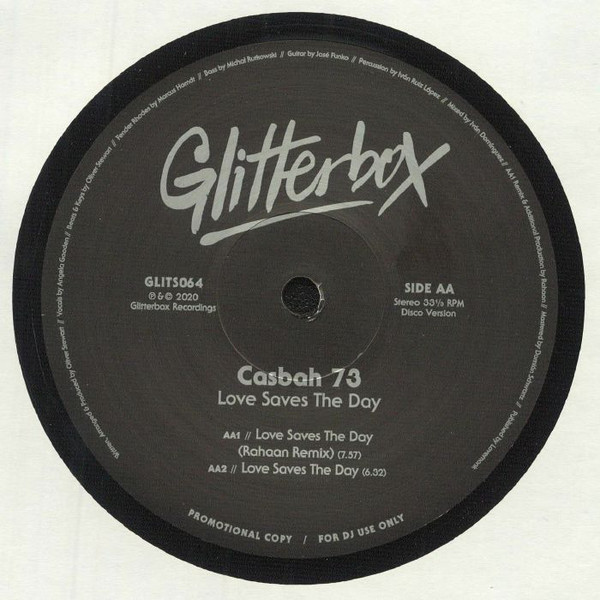 Casbah 73 makes his Glitterbox Recordings debut with an insatiably funky slice of disco soul ‘Love Saves The Day’. Driven by a soul-filled vocal hook from Angela Goode, this timeless jam’s authenticity lies in its rawness, sounding like it’s been ripped straight from a 1970s dancefloor while maintaining a freshness for today’s listeners. This special 12” delivery includes two stellar re-works, opening with master of the disco edit Danny Krivit’s funk-fuelled mix that smacks with New York City flare, bubbling keys and slap bass breakdowns to boot. The snapping Percussion Jam closes out the A-Side, before Chicago’s Rahaan takes control on the flip, taking the vintage sounding original and transforming it into a pumping, modern disco cut. Finally Casbah 73’s original rounds off the 12”, completing this package that is a must have for any discerning disco DJ.

Born in the States, Oli Stewart AKA Casbah 73, grew up in Madrid, where he developed a passion for music from an early age. He moved to Glasgow in the late '80s coinciding with the explosion of Rare Groove, Chicago House and the whole warehouse scene. This was his first taste of black music and duly inspired, he was soon DJing, organizing one-offs and parties and playing a mixture of funk, disco, NY garage and early house. By '91 he was buying vinyl big-time and secured a Saturday night residency known as "The Casbah", playing heavyweight jazz-dance, latin jazz and new funky sounds. As his DJing and record buying rapidly increased, he soon realised how difficult it was to get hold of those elusive sounds. Initially the plan was to buy/sell enough to keep himself in new tunes, so he set up Casbah Records and before long his lists took off to strong interest worldwide. The selection was roots: jazz, funk, soul, fusion, latin-jazz, bossa and disco. Always on the lookout for those hot 'new discoveries', he scoured the most unlikely second hand shops and markets from the Americas to Asia. His growing reputation as a premier digger brought him into contact with many of the more foward-thinking DJs and producers on the scene. Anyone in search of these rare vinyl gems over the last fifteen years has probably come across one of Oli's famous lists, as Casbah Records is considered one of the most respected rare vinyl mail order services out there. For years he has travelled the world and his 15,000+ rare record collection documents many of black music's best moments. With time, he started to concentrate more on production, experimenting with mixing beats and live instruments and, after growing tired of Scottish weather, he decided to move back to Madrid and set up his studio, where he is now producing tracks full time. His two first singles, "Cabo Verde Strut" and "The Way I Am" saw strong support from DJs around the globe, his debut album 'Moods & Grooves' was released in 2005. He recently put together 'Jazz Travels' a compilation of rare jazz and latin tracks for Hitop Records, featuring rare and deep musical treats from around the world. For the past 2 years he has also been involved with the radio crew 'Dial Soul', committed to broadcasting quality black music in Madrid. Casbah 73's dj sets are always passionate affairs, the emphasis being on dance music with feeling, spanning deep and soulful house, disco, latin, jazz & bossa. His desire to connect with the dancefloor and his eclectic experience, roots and knowledge are always in evidence. As well as regular residencies in Madrid, he has also performed at several music festivals recently, including the S.O.U.L. 06 Weekender, Elektronikaldia & Sonar Festival. 2008 newsflash: new album "Pushin' Forty" out now on Hitop Records, CD/download/double vinyl, remixes to come! Read more on Last.fm. User-contributed text is available under the Creative Commons By-SA License; additional terms may apply.
FREE SHIPPING ON ORDERS OVER £100 TO UK MAINLAND ONLY
See exclusions
View Cart