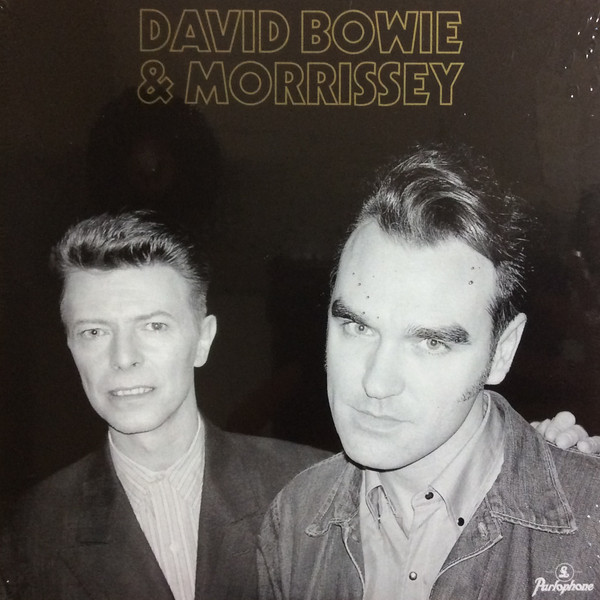 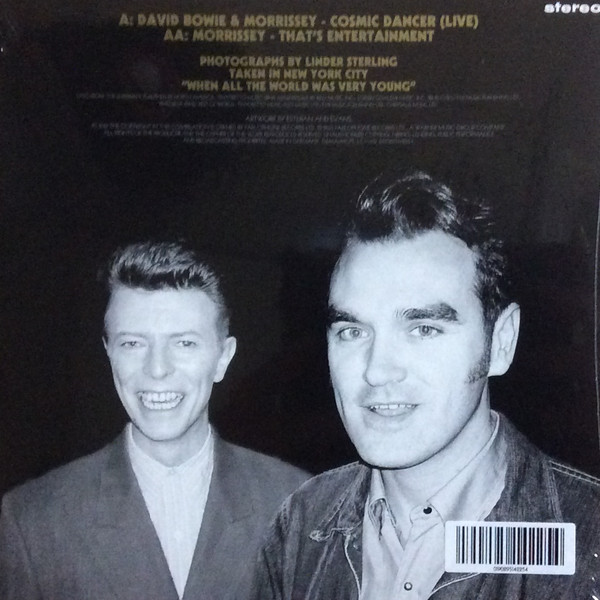 The 7-inch double A-side single featuring ‘Cosmic Dancer’ alongside Morrissey’s 2020 cover of The Jam’s ‘That’s Entertainment’ is to be released on 19th February. The sleeve front and back features photographs of David Bowie with Morrissey and were taken in New York City by Linder Sterling.

As a point to note, this version of 'That's Entertainment' is different to the commonly circulated version from 1993.

David Robert Jones (8 January 1947 – 10 January 2016), known professionally as David Bowie, was an English singer, songwriter and actor. He was a leading figure in the music industry and is considered one of the most influential musicians of the 20th century, acclaimed by critics and musicians, particularly for his innovative work during the 1970s. His career was marked by reinvention and visual presentation, with his music and stagecraft having a significant impact on popular music. During his lifetime, his record sales, estimated at 140 million albums worldwide, made him one of the world's best-selling music artists. In the UK, he was awarded ten platinum album certifications, eleven gold and eight silver, and released eleven number-one albums. In the US, he received five platinum and nine gold certifications. He was inducted into the Rock and Roll Hall of Fame in 1996. Born in Brixton, South London, Bowie developed an interest in music as a child, eventually studying art, music and design before embarking on a professional career as a musician in 1963. "Space Oddity" became his first top-five entry on the UK Singles Chart after its release in July 1969. After a period of experimentation, he re-emerged in 1972 during the glam rock era with his flamboyant and androgynous alter ego Ziggy Stardust. The character was spearheaded by the success of his single "Starman" and album The Rise and Fall of Ziggy Stardust and the Spiders from Mars, which won him widespread popularity. In 1975, Bowie's style shifted radically towards a sound he characterised as "plastic soul", initially alienating many of his UK devotees but garnering him his first major US crossover success with the number-one single "Fame" and the album Young Americans. In 1976, Bowie starred in the cult film The Man Who Fell to Earth, directed by Nicolas Roeg, and released Station to Station. The following year, he further confounded musical expectations with the electronic-inflected album Low (1977), the first of three collaborations with Brian Eno that came to be known as the "Berlin Trilogy". "Heroes" (1977) and Lodger (1979) followed; each album reached the UK top five and received lasting critical praise. After uneven commercial success in the late 1970s, Bowie had UK number ones with the 1980 single "Ashes to Ashes", its parent album Scary Monsters (and Super Creeps), and "Under Pressure", a 1981 collaboration with Queen. He reached his commercial peak in 1983 with Let's Dance; the album's title track topped both UK and US charts. Throughout the 1990s and 2000s, Bowie continued to experiment with musical styles, including industrial and jungle. He also continued acting; his roles included Major Jack Celliers in Merry Christmas, Mr. Lawrence (1983), Jareth the Goblin King in Labyrinth (1986), Pontius Pilate in The Last Temptation of Christ (1988), and Nikola Tesla in The Prestige (2006), among other film and television appearances and cameos. He stopped touring after 2004 and his last live performance was at a charity event in 2006. In 2013, Bowie returned from a decade-long recording hiatus with The Next Day. He remained musically active until he died of liver cancer two days after the release of his final album, Blackstar (2016). Read more on Last.fm. User-contributed text is available under the Creative Commons By-SA License; additional terms may apply.

Steven Patrick Morrissey, better known as Morrissey, is a British singer and lyricist of Irish descent born in Davyhulme, Manchester, United Kingdom on May 22, 1959. He was the lead singer of The Smiths, one of the most influential alternative bands in the 1980s. The group split up in 1987 and Morrissey started a successful solo career. His first solo album, Viva Hate was released only six months after The Smiths split, in March 1988. The album's first single "Suedehead" peaked at #5, a higher position than any Smiths single had ever achieved. In 1990, Bona Drag, a collection of his solo singles and b-sides, including popular songs such as "The Last of the Famous International Playboys" and "Everyday is Like Sunday" (which also appears on "Viva Hate") His second album 1991's Kill Uncle was not as well received as his first, with neither single achieving the Top 20. In 1992, the Mick Ronson-produced Your Arsenal was released and included singles such as "Tomorrow" and "We Hate It When Our Friends Become Successful". A live album, Beethoven Was Deaf, followed in 1993. In 1994, Morrissey released Vauxhall and I, which contained "The More You Ignore Me, The Closer I Get", his biggest hit in the United States, where it peaked at #46. Later that year, Morrissey also recorded a one-off project with Siouxsie of Siouxsie and the Banshees: they sang in duet on the single Interlude. After "Vauxhall and I", Morrissey released Southpaw Grammar (1995) and Maladjusted (1997), both of which failed to produce a UK Top 20 single. A period of musical inactivity followed in the late 90s and early 2000s, which was due to failure in finding a suitable label, according to a 2004 interview with Jools Holland. After seven years without a new album release, You Are the Quarry was released on May 17, 2004 (but one day later in the USA). The first single, Irish Blood, English Heart, was released internationally on May 10, 2004. The single reached number three in its first week of sales in the UK singles chart. To date, this is the highest placing chart position for Morrissey in his entire career as both a solo artist and the lead singer of The Smiths (the 2006 release You Have Killed Me also debuted at number three in its first week in the charts). It has sold over a million copies, making the album his most successful, solo or with The Smiths. Ringleader Of The Tormentors, produced by former David Bowie producer Tony Visconti, was released in April 2006. The album went straight to the top of the UK Album charts. Morrissey released a new Greatest Hits collection in February 2008, including two new songs: All You Need Is Me and That’s How People Grow Up, both released as singles. Morrissey is now signed to Decca Records. In 2009, Morrissey released his latest album, Years of Refusal, which was produced by Jerry Finn, his final production credit before his death. Later in the year, Morrissey released the B-sides collection Swords. 2009 also saw the re-releases of Maladjusted and Southpaw Grammar, two of his most critically maligned albums. The Maladjusted re-release ditched two of its singles, Papa Jack and Roy's Keen, in favour of several other tracks from the period, such as I Can Have Both. Sorrow Will Come in the End, written about Morrissey's vicious legal battle with Smiths drummer Mike Joyce, was also re-instated to the UK edition. Southpaw Grammar retained all of its original tracks, albeit re-sequenced, but recieved the addition of other tracks from that time period, including the new album closer Nobody Loves Us. Two other Morrissey releases came in 2009; The HMV/Parlophone Singles '88-'95 and Swords, the former a 3 CD compilation of singles and B-sides from Viva Hate through to Vauxhall and I, the latter a compilation of B-sides from You Are The Quarry, Ringleader of the Tormentors, and Years of Refusal. A new Very Best Of collection was released in 2011, accompanied by a UK tour. Morrissey's eleventh solo album, 'Low in High School', was released on November 17th, 2017. ' Low in high School' was produced by Joe Chiccarelli same producer as Morrissey’s ‘World Peace is None of Your Business’. Morrissey's twelth studio album "California Son" is released on 24 May 2019 on the singer's label étienne and licensed on BMG, the album is a collection of cover versions. It is recorded in 2018 by Joe Chiccarelli, a frequent collaborator of Morrissey. Morrissey's new studio album, I Am Not A Dog On A Chain, is scheduled for March 2020 release by BMG. The album was recorded in St-remy, France, with producer Joe Chiccarelli. Read more on Last.fm. User-contributed text is available under the Creative Commons By-SA License; additional terms may apply.
FREE SHIPPING ON ORDERS OVER £100 TO UK MAINLAND ONLY
See exclusions
View Cart