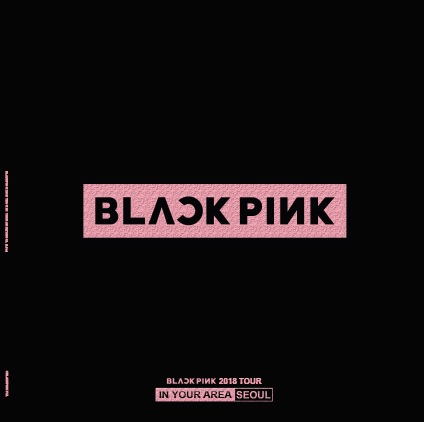 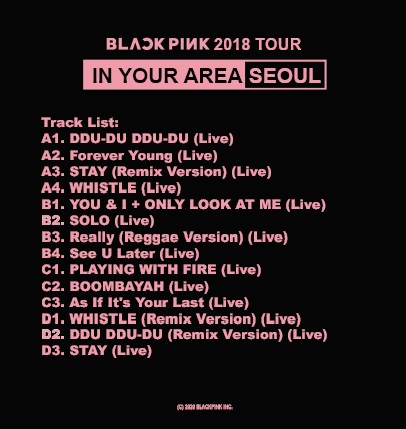 BLACKPINK (블랙핑크) is a South Korean girl group formed by YG Entertainment in 2016. The group consists of four members (from oldest to youngest): Jisoo (지수), Jennie (제니), Rosé (로제), and Lisa (리사). They debuted on August 8, 2016 with the single album SQUARE ONE and co-title tracks "Whistle" and "BOOMBAYAH". Their debut broke numerous records: "Whistle" achieved an all-time kill three hours after release and went #1 in Korea, SQUARE ONE ranked first in the iTunes Worldwide Chart, while "BOOMBAYAH" had the most views in twenty-four hours for a debut song and became a big hit internationally. Both title tracks got more than two million views within twenty-four hours of their release, unheard of for a debut. They also became the fastest girl group to win a music show in the history of South Korea, only thirteen days after their debut. BLACKPINK released their second single album SQUARE TWO with the lead singles "PLAYING WITH FIRE" and "STAY" on November 1, 2016. ''PLAYING WITH FIRE'' was another huge hit for the group, only peaking at #3 but the track's longevity proved it wrong, the single charted until 2018 in Korea. On June 13, 2017, YG Entertainment revealed a teaser for a new single. Member Jisoo said that the group had thus far in their history only had "Black" concepts up until then, and that this new single would be a "Pink" concept. The song was intended to be a surprise for fans while BLACKPINK prepares for SQUARE THREE. On June 22, 2017, BLACKPINK released the digital single AS IF IT'S YOUR LAST. The song was a commercial success, topping Billboard's World Digital Songs and peaking at number 3 in Korea. In May of 2017, it was reported that the group would be holding a Japanese debut showcase at Nippon Budokan on July 20. BLACKPINK made their official Japanese debut on August 30, 2017, with the release of their self-titled extended play BLACKPINK. The extended play debuted atop the Oricon Albums Chart with 39,000 physical copies sold in its first week. Almost a year after their last Korean comeback, BLACKPINK came back with their first EP SQUARE UP on June 15th, 2018 and it became their most successful project ever. The album's lead single "DDU-DU DDU-DU" became their biggest hit to date in Korea, peaking at #1 and selling over 2,500,000 digital copies, and even charted on Billboard 100, peaking at #55, the biggest peak for a girl group at the time in US. The song later on went gold in the country. In November 2019, the music video for ''DDU-DU DDU-DU'' surpassed one billion views, becoming the most viewed video for a K-Pop group. In Korea, the b-side track "Forever Young" also achieved great success, peaking at #2 and also selling over 2,500,000 digital copies. In October of the same year, the group signed with Interscope Records for a global partnership with YG Entertainment. They would be represented by Interscope and Universal Music Group outside of Asia. BLACKPINK debuted in the USA on February 9th, 2019 at Universal Music Group's 2019 Grammy Artist Showcase, which was invite-only. Later on, it was revealed BLACKPINK will be performing at Coachella, making them the first female K-pop group to do so. On April 5th of 2019, just one week before their first performance at Coachella, they released their second EP titled KILL THIS LOVE. The album's lead single "Kill This Love" was a great success both domestically and internationally. It peaked at #2 in Korea and charted in numerous charts worldwide, most notably the single peaked at #41 in the USA and charted for several weeks, setting yet another record. On April 22, 2020 it was confirmed the group would be featured in Lady Gaga's sixth studio album Chromatica, on the track titled "Sour Candy". The single released on the 28th of May, a day before the full album. It broke records, being the song by a K-pop girl group with the most #1's in 56 different countries on iTunes, and breaking their own record of 40, which belonged to their song "Kill This Love". Their long-awaited next project began on June 26, 2020, with the release of their pre-debut single "How You Like That". This single broke many records; the song's music video is the fastest video to reach 10 million likes in history. On August 28, 2020, BLACKPINK released a single titled Ice Cream" in collaboration with Selena Gomez for their first Korean-language album, THE ALBUM. On October 2 of the same year, The Album would release with a music video and single titled Lovesick Girls. The group has reached outstanding numbers and has been praised endlessly. Forbes Korea Power Celebrity has named them the most influential celebrities of Korea in 2019 and the third most influential celebrities in Korea in 2020. As of October 2020, Blackpink is the 2nd most subscribed music channel on YouTube behind Justin Bieber. With the rest of their career ahead of them, BLACKPINK will continue to impact the pop industry domestically and around the world. BLACKPINK is the revolution! Read more on Last.fm. User-contributed text is available under the Creative Commons By-SA License; additional terms may apply.

OTHER RELEASES ON AAA RECORDINGS OR BY BLACKPINK:

We have many other items in stock by Blackpink and on the label AAA Recordings.