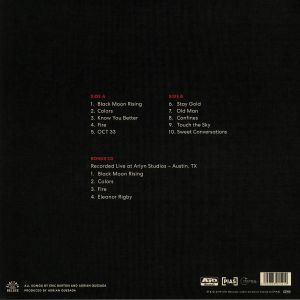 - NEW RELEASE
Sorry, this item is currently unavailable.
ARTIST:
Black Pumas
TITLE:
[Tri] Black Pumas
LABEL:
ATO Records
CATNO:
ATO0500LP
STYLE:
Funk /
FORMAT:
Vinyl record
DESCRIPTION:
Classic Funk Reissue - Faintly psychedelic, wholeheartedly vintage-sounding Cali-Tex soul duo Black Pumas consist of multi-instrumentalist/producer Adrian Quesada and singer/guitarist Eric Burton. Quesada, an Austin music scene veteran with assorted projects on the boil and in the past -- he won a Grammy with the Latin funk orchestra Grupo Fantasma and was behind Look at My Soul: The Latin Shade of Texas Soul -- laid down the preliminary work in 2017 with some instrumentals. In need of a vocalist, he was put in touch with California transplant Burton, also a guitarist and songwriter. Burton's background in church, musical theater, and busking cuts through these ten studied originals, which are filled out with a supporting group of musicians covering the rhythm section, additional guitar and keyboards, plus horns, strings, and background vocals. The singer testifies with conviction, embodies roles ranging from troubled everyman to enamored lover -- with grit in varying grades -- and applies his experience in turning surprised heads within earshot. A substantial portion of the album is either reverential or referential to a degree that it can sound more like an exercise in homage or a licensing tactic than a distinctive work. Even before Burton enters with a resolute rumination, the start of "Stay Gold" unmistakably evokes rustic Bill Withers. In "OCT 33," Burton paraphrases the Stylistics as he gently implores his baby. Most cleverly, or distractingly, the first verse of "Know You Better" is stuffed with word strings that seem to deliberately reference groups such as Floaters, Parliament, and the Jackson 5. Quesada and Burton doubtlessly know and understand the source backward and forward. They're at their best when they diverge a little, like when they drag Willie Mitchell's Hi Records sound across the Texas landscape ("Black Moon Rising") or deliver stoned folk-soul on the level of Love and Rotary Connection ("Sweet Conversation").

Black Pumas is led by the creative partnership between Grammy Award-winning guitarist / producer Adrian Quesada (1977) and songwriter Eric Burton (1989). Burton is a relative newcomer who arrived in Austin in 2015 after busking his way across the country from Los Angeles, while Quesada has a storied reputation for playing in bands like Grupo Fantasma and Brownout while also producing acclaimed projects like 2018’s ‘Look At My Soul: The Latin Shade Of Texas Soul.’ After the two connected via friends in the Austin scene, they began to collaborate on a new sound that transmutes soul into something idiosyncratically modern. Reminiscent of Ghostface Killah and Motown in equal measure, this original sound ensured that Black Pumas’ weekly residency at C-Boys quickly became “the hottest party in town” (Austin-American Statesman). In June of 2019 their self-titled debut LP arrived, which helped to earn the duo a Grammy nomination for Best New Artist. Read more on Last.fm. User-contributed text is available under the Creative Commons By-SA License; additional terms may apply.
FREE SHIPPING ON ORDERS OVER £100 TO UK MAINLAND ONLY
See exclusions
View Cart