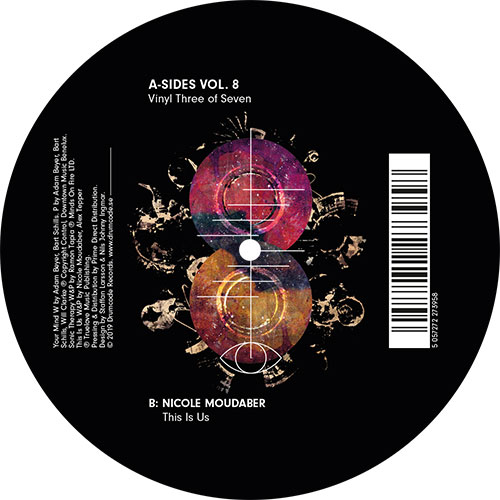 The 25-track strong compilation, split across 7 EPs, features standout cuts Beyer has received over the last 12 months, but been unable to find room for in Drumcode’s regular release schedule, such is the volume and high standard of music that’s submitted.

Part 1 sees Layton Giordani drop the stirring chord-driven ‘Chrome’, whilst Veerus follows up his powerful DC release with the fierce ‘Prophecy’ and BEC makes a blistering debut with ‘Hypersphere’.

The highlight-rich compilation also includes Jamie Jones & Darius Syrossian’s buzzy Drumcode debut ‘The Grid’, Nicole Moudaber’s first DC release in 5 years with the mesmerizing ‘This Is Us’, Will Clarke’s bass-drenched re-work of Adam Beyer & Bart Skils ‘Your Mind’ and Joey Beltram’s first Drumcode release in 11 years with the retro-tinged ‘Can You Feel It’.

The beloved Alan Fitzpatrick returns to the fold with the searing ‘Heiße Rakete’, while the exciting Hyperloop project links up with Upercent for the slinky loop-driven ‘Rouge’, alongside label mainstay Wehbba with ‘Mantra’, combining techno classicism with future-focused groove.

There’s a troupe of debutants donning the Drumcode jersey for the first time, including Shelley Johansson, Avision, Zimmz, Woo York, SAMA (in a terrific collaboration with Secret Cinema) and Ilija Djokovic, who delivers a shimmering highlight with ‘Aura’, a particular favourite of Beyer’s over the last year. Raxon also debuts on the label after a couple of quality additions to the Truesoul back catalogue.

Adam Beyer's music is synonymous with all that is exciting about techno. Having emerged as the figurehead of the hugely prolific Swedish techno scene, Beyer's focused and considered approach to his craft has worked to confirm his position as a globally recognized DJ and producer who headlines the worlds cutting edge clubs and festivals week-in-week-out. However life in music began for Beyer down in the grassroots; making the most of Stockholm's blossoming techno scene and working in the city's renowned Planet Rhythm record store. It was here that Adam hooked up with the triumvirate of Cari Lekebusch, Joel Mull and Jesper Dahlback; sharing a passion for dynamic and diverse techno which inevitably led to the beginnings of production experimentation and musical exploration which has maintained to the present day. Beginning with the debut Drumcode 1 released on Planet Rhythm's record label, Beyer's production highlights including releases for Plus 8, NovaMute, Cocoon and Soma; remixes of Underworld 'PushUpstairs', Morgan 'Flowerchild' and Matthew Jonson 'Marionette' and a wealth of material on his own Drumcode, Truesoul and MadEye imprints. Something of an obsessive when it comes to creating his own productions the key to understanding the Swede's studio method can be traced back his formative years. The beating percussive pulse of his music has been at the heart of his musical taste since adopting the role of drummer in a band while at school. By the time he was a young adult he was fully immersed in electronic music. DJing at friends parties, working in the record shop, playing around with samplers and an Atari computer, investing what money he could in better and more equipment; everything was focused on music. This self-drive and dedication has been central to the development of his sound. Self-taught and instinctively creative; the result is an individual style founded on a patient and natural technique that neatly balances impact and innovation. The development of his own sound can be seen in the maturity of the three record labels Beyer positions at the heart of his operation. A passionate A&R, Beyer has bucked recent trends as Drumcode, Truesoul and Mad Eye go from strength to strength. Established in 1996, Drumcode was and still is about a very clear musical vision. Honest, forward thinking and functional; the label has stayed on its one true course from the outset; providing a consistent home to core artists such as Cari Lekebusch, Par Grindvik, Jesper Dahlback and Joel Mull while creating a platform for the leaders of the techno new-wave; Paul Ritch, Joseph Capriati and Alan Fitzpatrick. Truesoul pushes the boundaries of the accepted norm with forward-thinking music from artists such as; Heiko Laux, Steve Rachmad, Dustin Zahn and Nihad Tule while Mad Eye is where Beyer showcases his more personal and inventive productions. Beyer's progressive approach to his craft transcends into the live arena. A natural and accomplished DJ capable of playing across the range of his genre, his sets are characterized by a mesmerizing fluidity that enhances the power and impact of the music he plays; as witnessed on compilations for Fabric, Music Man and Timewarp. Greeted with the knowing expectation reserved for headline acts wherever he plays, Beyer prefers to share the limelight with the acts he supports on his labels. Nowhere is this attitude more evident than at the expanding network of Drumcode parties that are now a regular event across North America, Europe, Asia, Australia and South America. Read more on Last.fm. User-contributed text is available under the Creative Commons By-SA License; additional terms may apply.

Ramon Tapia alias El Carlitto, son of a Chilenean musician who had to run from his home country as he stood up against the regime, and a Dutch woman who was brave enough to fall in love, is a funny character, a very ambitious one: No one would have guessed he, the young jeweler working behind the counter of an Antwerp record shop, would one day release records on labels as renowned as Great Stuff,Turbo Rec, Abe Duque Rec, Monique Musique , Herzblut, Yellow Tail and Strictly Rhythm, just to name a few. But he does! And he does not stop there! With remixes for Marco Resmann , Marc Miroir , Butch , Funk Dvoid , Martin Eyerer and Mauro Picotto under his belt, things are looking more than good for the energetic player. . With a happy past in gabba and Michael Jackson and Quincy Jones roots, Ramon has a firm understanding of diversity and a very broad taste in music, readily amplified by his open mind and soul. His Latin background and his Dutch upbringing perfectly explain his cultural curiosity and his deep rooted sense for groove and rhythm. Shimmering through in his intrinsic productions is his love for structural buildups and breakdowns and harmonies which underlay the driving beats. Mission: “To make people move by taking them on a trip in my musical head without even going into my head,” laughs Ramon, who started getting into making music to “have more feeling for the music. I started with some guy I knew from the shop then I learned step by step to create my own sound. After a while I got the impression that the people I worked with never did the things that I had flying around in my head, so I started to do my own stuff. It gives me a huge satisfaction when I see people smile when they hear my music.” “A lot of music has had a huge influence on my productions: I like everything from oldskool rap, Ice T/NWA, Snoop, Boards of Canada, totally freaked out stuff, everything that makes sound and moves me. I will buy and play electro, house, minimal, whatever you wanna call it, I like everything. I also love the old Latino stuff, the folk of Latin America.” It shows: Ramon’s music indeed makes people smile - and bounce. It’s filled with the joyous exuberance of the high octane party spirit that initially inspired Ramon to get involved when he was young. It was actually down to his two elder sisters whose musical taste had a huge influence on the youngster. Returning home from the most renowned clubs of the Nineties their gleaming eyes told tales of exuberance and liberation, making Ramon aware of the power of the electronic beats. Completely fascinated by the sounds of Front 242, Frank De Wulf, Kraftwerk, A Split Second, Tyree Cooper and Kevin "Reese" Saunderson, it was only after his move to Belgium’s techno power capital Antwerp that Ramon started to buy vinyl and become involved in DJing. Working in a record shop while studying to be a gold smith, he realized that music was his life, subconsciously tracing his father’s foot steps. His dad, the only other musician in the family and whose music was provocative enough to enrage the repressive military government of his home country Chile, is possibly one of the main reasons why Ramon does not get disheartened on his way to the top. “I just want to do my own thing and play.” Antwerp, Belgium 2007 Read more on Last.fm. User-contributed text is available under the Creative Commons By-SA License; additional terms may apply.

Throughout 2007 Nicole had releases on Viva Music, Plastic City and Azuli as well as remixing Tiger Stripes for Urbantorque and ‘Muzik Xpress’ by X-Press 2 on Skint. In 2008 her new productions are recieving major club and radio support from an increasing number of tastemaker DJs such as Miss Kitten - who played 'Radical High' twice in recent set at Space : Ibiza - as well as Dubfire and Anja Schneider. Currently, Nicole's 2008 release schedule is jam-packed. 'Radical High' is forthcoming as part of the 'Dark Side Of Summer EP' on Viva Music while 'Mirage' is set for release on Plastic City and 'The Slap EP' is forthcoming on Azuli. On the remix front, amongst other projects, Nicole has recently remixed two of the summer's hottest tracks in the form of 'Everthing's Gonna Be Alright' by James Doman and 'Chime' by The Shapeshifters. These remixes are available now on Positiva and Defected respectively. Also, look out for a guest mix on John Digweed's Radio Show coming up in November. Read more on Last.fm. User-contributed text is available under the Creative Commons By-SA License; additional terms may apply.
FREE SHIPPING ON ORDERS OVER £100 TO UK MAINLAND ONLY
See exclusions
View Cart