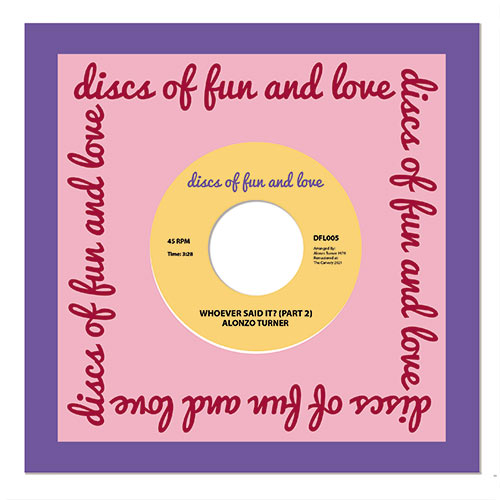 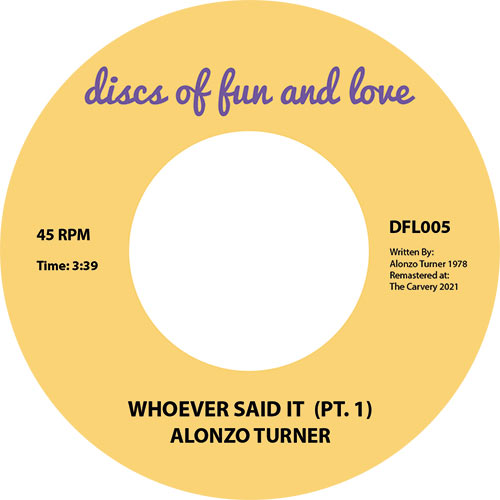 ALONZO TURNER - WHOEVER SAID IT

- NEW RELEASE
Sorry, this item is currently unavailable.
ARTIST:
Alonzo Turner
TITLE:
Whoever Said It
LABEL:
Disco Of Fun & Love
CATNO:
DFL005
STYLE:
Disco / Funk /
FORMAT:
Vinyl record
DESCRIPTION:
1978 Disco / Funk Classic Pressed on Ltd Edition 7" - We're back with our 5th release! This time it's the certified dancefloor weapon by Alonzo Turner ‘Whoever Said It?’ Released on a 7 inch with a part 1 & 2, this record has been played on dancefloors worldwide by such players as Rahaan, Sadar Bahar and more, with those selectors favouring the part 2 in the most euphoric moments with that incredible vocal half way through. The record has remained hard to come by for most so we are thrilled to have this one out there as an affordable and great sounding reissue.

Remastered as always by Frank at The Carvery and this time released with a vibrant company sleeve and a baby yellow label on the 7 to match the original.

"Alonzo Turner was born in Northern California in 1955 and was introduced to music by his church, of which his father was pastor. As a young adult, Turner moves to West Hollywood and at 23, he starts to manage a local rock band while working day and night to write what will turn out to be his first and only release, ‘Whoever Said It’.

The song catches the attention of Dave Crawford, A former producer at Atlantic. Like most stuff on Crawford’s label, LA Records, the single never makes it to the charts but helps Turner make a name for himself in L.A. and Orange County where he performs often. There is only speculation about what happened to ‘You’ve Got Something’, the LP on which the song was meant to appear, but five years later Alonzo ends up writing an eponymous piece for Norma Lewis (Shakatak, Charade) on her debut album ‘It’s Gonna Happen’.

In 1984, struggling to make ends meet from his music career, Turner takes a part time job at a record store, while also pushing garments to an elite clientele in Beverly Hills, even selling clothes to one of Michael Jackson’s designers. In 1991, aged 38, Alonzo Turner will pass away from illness.

Written by a loner who lived in a modest flat filled with antiques and expensive art pieces, ‘Whoever Said It’ is a testament to the idea that love does exist beyond our imagination. While asking who is to blame for spreading the opposite theory, Turner makes this simple yet compelling argument to debunk it: emotions are a motor of action, they literally set us in motion and therefore reality derives its very momentum from them."