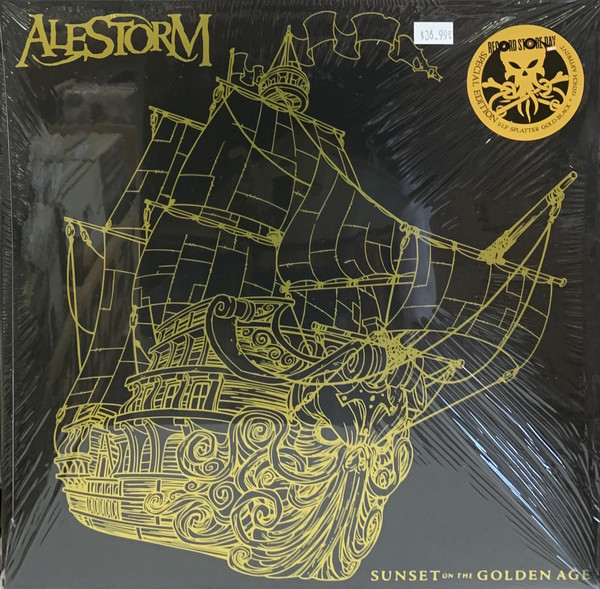 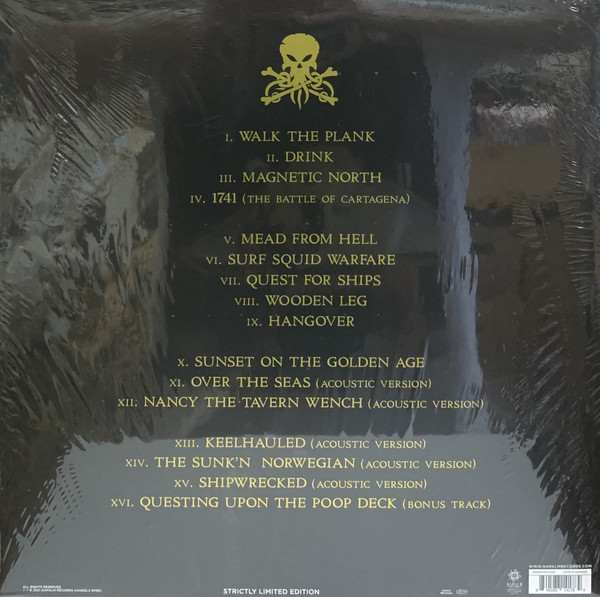 ALESTORM - SUNSET ON THE GOLDEN AGE

Alestorm is a multi-national power metal band originally from Perth, Scotland. Their music is characterized by a pirate theme, and as a result they have been dubbed a "pirate metal" band by many critics and their fanbase. After signing to Napalm Records in 2007, their debut album Captain Morgan's Revenge, was released on 25 January 2008. Black Sails at Midnight, the band's second album, was released on 27 May 2009. The band's third album, Back Through Time, was released on 3 June 2011. The fourth album from the band, Sunset on the Golden Age, was released in August 2014. Their fifth album No Grave But the Sea was released on 26 May 2017. Their sixth and latest album, Curse of the Crystal Coconut, was released on 29 May 2020. The band was founded in 2004 as Battleheart, a studio project by Christopher Bowes and Gavin Harper. Originally intended as a standard power metal band, the success of song "Heavy Metal Pirates" convinced the band to permanently adopt a pirate theme and incorporate folk metal elements into their music. Gavin and Christopher recorded & released two independent demos in 2006, which were received well by the local metal community. The band began to perform live in 2006, with a lineup consisting of Bowes (vocals and keytar), Harper (guitars), Dani Evans (bass) and Doug Swierczek (drums). Doug Swierczek eventually left the band later that year and was replaced by Ian Wilson. After a period of inactivity, in late 2007 Battleheart sent their demos to Napalm Records, and the band was promptly offered a record deal. After being signed by Napalm Records, the band changed their name from Battleheart to Alestorm. Their debut album, Captain Morgan's Revenge, was released in early 2008. By September 2008, original guitarist Gavin Harper had left the band. Tim Shaw was Harper's replacement, but after a brief period of touring, was fired from the band. To fill the guitarist position, Dani Evans switched instruments from bass to guitar, and Gareth Murdock of Waylander joined as the replacement bassist. The band's 2nd album Black Sails at Midnight was released in May 2009. In March 2010, Ian Wilson left the band and was replaced with a new drummer named Peter Alcorn. Alestorm's third album, Back Through Time, was Alcorn's first appearance on an Alestorm album. In October 2011, Elliot Vernon joined the band as keyboard player and performing screamed / death metal vocals. The band released their fourth record entitled "Sunset on the Golden Age" on 1 August 2014, reaching the #1 position in the UK Rock Chart. In October 2016, Christopher Bowes announced during a concert on the Super Smashed Turbo Tour that the band planned to begin recording a fifth studio album in January 2017. The fifth record, entitled "No Grave But the Sea", was released on 26 May 2017. On 8 January 2020, the band announced the title of their sixth studio album, "Curse of the Crystal Coconut". This was released on May 29th, 2020. Prior to its release, Alestorm released the singles "Treasure Chest Party Quest", "Tortuga" (feat. Captain Yarrface of Rumahoy) and "Fannybaws". Alestorm is generally classified as pirate metal, folk metal, power metal, heavy metal, and hard rock. The band refer to themselves as "True Scottish Pirate Metal" and are identifiable by the pirate-themed lyrics in their songs. Alestorm's music utilizes the upbeat epic style of power metal with many orchestrations commonly found in folk metal. Album recordings feature heavy use of real trumpets and trombones, whilst implementing accordion synths, fiddle and tin whistle to convey a pirate sea shanty feel. Alestorm uses factors of absurdity to bring a jocular feel to their music, incorporating irreverent lyrical themes while retaining a tenuous connection to pirates. They have also been known to experiment with different metal genres, going from songs that are predominantly thrash metal ("Black Sails at Midnight") to a switch to a black metal sonority mid-song ("Death Throes of the Terrorsquid"). The band's later albums have begun to incorporate more screamed vocals by keyboard player Elliot Vernon, adding hints of metalcore ("Magnetic North") and death metal ("1741 – The Battle of Cartagena") to the band's sound. Official bio: Avast, ye landlubbers! From the deepest darkest depths of the Caribbean comes Alestorm, a drunken band of pirates on an epic quest to drink your beer, steal your rum, and be the greatest damn band that ever did sail the seven seas! From humble beginnings playing shows to farm animals in a field somewhere in Eastern Scotland, Alestorm have evolved into an international party machine hellbent on conquering album charts and festival stages throughout the world, with their infectious brand of 'Pirate Metal' and their dashing good looks. Somehow they've managed to convince hundreds of thousands of people from New Zealand to Argentina to Lithuania and everywhere in between (except Paraguay), that it's cool to wear a pirate hat and sing stupid songs about getting drunk and stealing ships. So prepare your spleens, because Alestorm are coming to kick ass and chew gum. And they're all out of ass. Also, they have a giant inflatable duck. Does your band have a giant inflatable duck? No. I didn't think so. Read more on Last.fm. User-contributed text is available under the Creative Commons By-SA License; additional terms may apply.
FREE SHIPPING ON ORDERS OVER £100 TO UK MAINLAND ONLY
See exclusions
View Cart