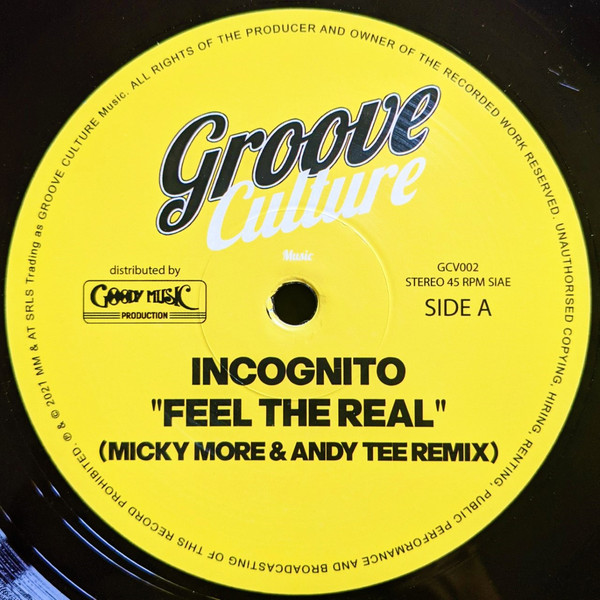 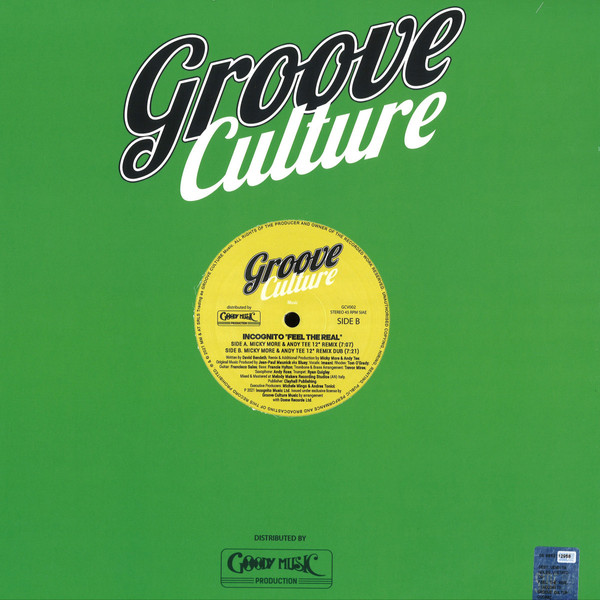 - NEW RELEASE
Sorry, this item is currently unavailable.
ARTIST:
Incognito
TITLE:
Feel The Real (Micky More & Andy Tee Remix)
LABEL:
Groove Culture Music
CATNO:
GCV002
STYLE:
House /
FORMAT:
Vinyl record
DESCRIPTION:
Funky Vocal House - Legendary acid jazz group Incognito have a playful, soulful sound like no other, many years after they first dreamt it up with Gilles Peterson's Talking Loud label in the 90s. Whenever it gets dropped don the floor, people go wild, and DJs continue to edit and remix it for modern audiences. Here their timeless 'Feel The Real' gets a double treatment from Micky More & Andy Tee. On the a-side they layer up the jazzy keys with nice noodling bass, and on the flip is a dub of the remix that pairs things back and allows those funky beats and chords to really shine.

There are multiple artists called Incognito: 1. An acid jazz project by Jean-Paul "Bluey" Maunick with deep roots in the 1970's jazz/funk/fusion world (active from 1979 to present) See below 1. for their discography. 2. A smooth jazz online group from Tupelo Records / IODA. No other information found about this unregistered band ("Buy at Insound" link is broken). They released similar or exactly the same title tunes/logo as the other Incognito above. (See below for details) 3. A Rock/Pop band who released album Four (2007) from Aero Music 4. A blues rock band from Vancouver. Album releases include Blues Alive! (1995) and Bitter Sweet (1999). 5. A drum & bass producer/DJ from Nelson, New Zealand. 6. A UK drill rapper (also known as SK), associated with the UK drill group Moscow17. Incognito are a British band, widely regarded as one of the key members of the acid jazz movement. Their first album, Jazz Funk, was released in 1981, with 13 further albums following, the last of which, Transatlantic RPM, was released in July 2010. Throughout the band's history, it has been led and driven by composer, producer, guitarist and singer Jean-Paul "Bluey" Maunick. Other notable guest singers are Leon Ware, Chaka Khan, Mario Biondi, Maysa, Jocelyn Brown and Carleen Anderson. The band has had intermittent success in the singles charts, with their breakthrough hit a version of the Ronnie Laws tune "Always There", featuring Jocelyn Brown. They have also been a favourite of various re-mixers, including Masters At Work, David Morales, Roger Sanchez and Jazzanova, and have released three albums consisting almost entirely of remixes. Official Site http://www.incognito.org.uk Albums - see Incognito Releases * 1981 Jazz Funk * 1991 Inside Life * 1992 Tribes, Vibes And Scribes * 1993 Positivity * 1995 100° and Rising (* 1995 100ﾟ And Rising +1) * 1996 Beneath The Surface * 1999 No Time Like The Future * 2001 Life, Stranger Than Fiction * 2003 Who Needs Love * 2004 Adventures in Black Sunshine * 2005 Eleven * 2006 Bees + Things + Flowers * 2008 Tales From The Beach * 2010 Transatlantic RPM Popular songs * Everyday * Roots * Talkin' Loud 2. Not only this Smooth Jazz band shares same band name, they have a song called "Millenium"(2006) that is exactly same title (intentionally misspelled) as the other Incognito's (Jazz Funk) song on their album "100° and Rising"(1995), plus the logo resembles in font. The title "Every Day"(2006) on the album Street Smarts exactly alike in titles (when read) with the other Incognito's famous tune "Everyday"(1995). They are often tagged totec radio. Also mis-tagged by fans as bluey where there's no link to Jean-Paul "Bluey" Maunick himself. r00ts & t4lk1n l0ud tags also used, that could mislead fans to the Bluey's famous tunes like "Roots" & "Talkin' Loud". Most of the album below are about 30 minutes short and they all released by Tupelo Records There are 3 more albums released by this band(Tupelo Records) * 2005 Make Or Break * 2006 Millenium * 2006 Street Smarts * 2008 Only the Truth Read more on Last.fm. User-contributed text is available under the Creative Commons By-SA License; additional terms may apply.
FREE SHIPPING ON ORDERS OVER £100 TO UK MAINLAND ONLY
See exclusions
View Cart